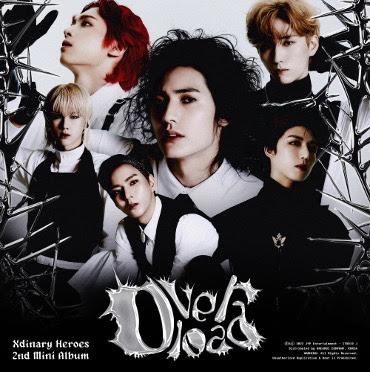 The 7-track mini-album depicts a confident but somehow precarious state of Xdinary Heroes with an IT term ‘overload’ with songs such as “Hair Cut,” “Zzz..,” “LUNATIC,” “Crack in the mirror,” “Ghost,” “X-MAS” and the instrumental version of “Hair Cut.”

In this chapter, the members are shown as incomplete heroes who are still unstable and insecure to embrace the popular adage, ”with great power comes great responsibility.” In the process of transitioning to a new world, the members get intoxicated with daze and claim their heroism under the name of madness. Are they heroes who have a good influence through music? Or are they villains who cause chaos in the world?

In discussing their excitement about the release, the band said, “Hello, everyone! This is Xdinary Heroes with our 2nd mini album! We are beyond excited to share our new songs! We hope that these songs will bring energy and happiness to the listeners! Please stay updated for our official release! Thank you!”

The band has recently been nominated in the ‘Best New Male Artist’ and ‘Best Band Performance’ categories of MAMA, one of the most prolific annual music awards in K-pop.