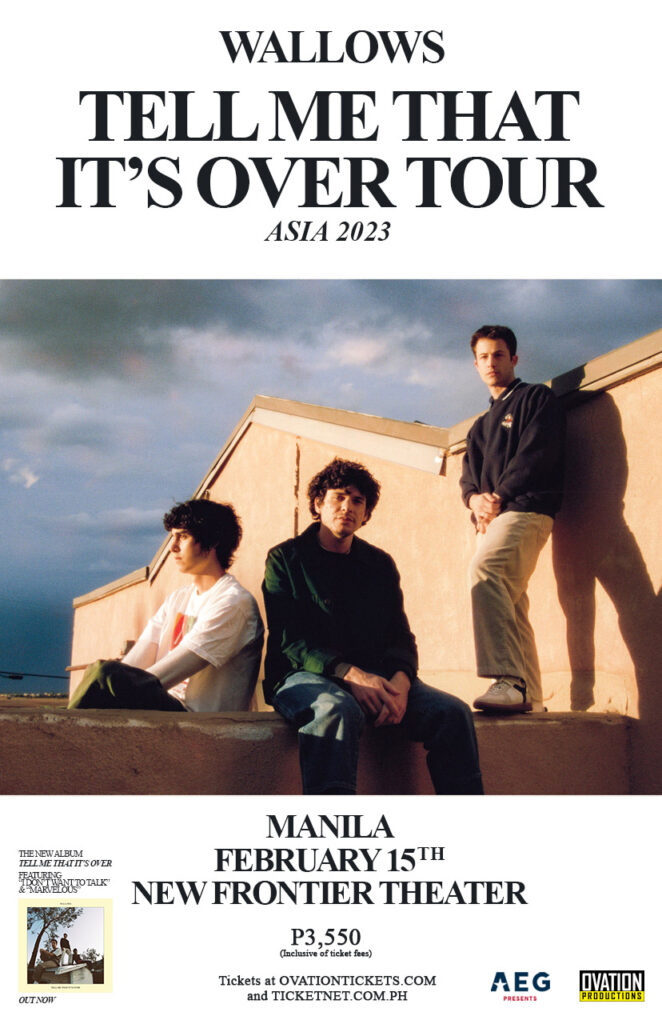 Promoted by AEG Presents Asia and Ovation Productions, tickets to WALLOWS’s TELL ME THAT IT’S OVER TOUR ASIA 2023 MANILA are priced at P3,550 and will go on sale at 10AM  on Friday, November 11 via ovationtickets.com and ticketnet.com.ph.

Wallows is an American alternative rock band based in Los Angeles comprised of Dylan Minnette, Braeden Lemasters, and Cole Preston. The band began releasing songs independently in April 2017 with their first single ‘Pleaser’, which reached number two on the Spotify Global Viral 50 chart. In 2018, Wallows signed with Atlantic Records and released their major label debut EP, Spring, produced by GRAMMY® award winning producer John Congleton. The band released their debut studio album, Nothing Happens, in 2019, which featured the double platinum single ‘Are You Bored Yet? (feat. Clairo)’ and was also produced by Congleton, followed by their 2020 EP, Remote.

Wallows sophomore album Tell Me That It’s Over, released March 25th, was produced by the multi- GRAMMY® Award winner Ariel Rechtshaid (Vampire Weekend, Haim, Adele) and contains 10 tracks featuring an eclectic array of styles, everything from lo-fi post-punk to indie-folk to early-’90s dance-pop psychedelia. Tell Me That It’s Over is a thrilling continuation of the sonic exploration that began on Wallows’ 2019 album Nothing Happens— one of the highest streamed debuts from any band that year.

Are you bored yet? : https://www.youtube.com/watch?v=wIgmyE5Juzw

At the end of the day : https://www.youtube.com/watch?v=4-as9nylX6I

I don’t want to talk : https://www.youtube.com/watch?v=jKvvoaNqOuc