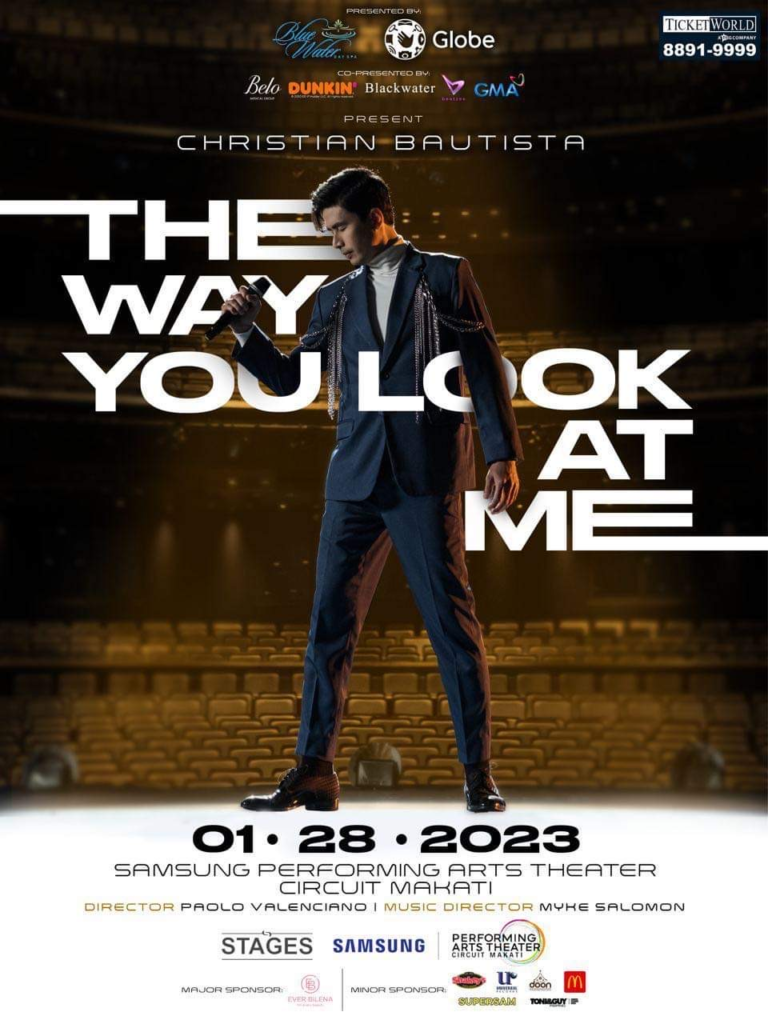 It has been a fruitful 20 years for Christian Bautista in the showbiz industry.

People first got a glimpse of Christian as a contestant in Star In A Million, a Philippine reality show aired on ABS-CBN, winning 4th place in the competition in 2003. After the contest, he signed a recording contract with Warner Music Philippines and released his first self-titled debut album which earned a multi-platinum record award. This established his name in the OPM industry and made his songs “The Way You Look At Me”, “Colour Everywhere”, and “Hands to Heaven” into classic hits. It paved the way for the singer’s popularity not just in the Philippines, but in Southeast Asian countries as well, mainly in Indonesia.

Christian eventually transitioned to being a regular in ABS-CBN’s variety show ASAP.

In 2011, he was tapped to star in a musical series, called the Kitchen Musical which aired all the Asian network AXN, with fellow Stages talent, Karylle, and other Asian and Filipino talents in Singapore. During this time.

In March 2013, the singer transferred to GMA Kapuso network and is now running 9 years with the management. He remains a regular on AOS, and as a mainstay pillar judge in the highly successful singing competition show called The Clash.

In his 20 years in the business, Christian remains true to his musical core and continues to evolve as a performer not only is he continuing to delight audiences With producing and performing songs for his supporters. He has written, and even produced a few songs such as Kapit, his single he wrote and produced called Ako Naman and sung by Jessica Villarubin song which won an Awit award in 2022.

“The Way You Look At Me” Concert in Indonesia Last 2022

Christian Bautista stirred up fans’ excitement with his 20th Anniversary not only in the Philippines but in Indonesia as well! Last October 8, 2022, he performed at Atlas Beach Fest Culinary Grounds in Bali, Indonesia for his “The Way You Look At Me’ concert.

The artist’s quick trip was totally jam-packed with events and guestings;

Some of which are with RCTI TV, Trans TV, and a bank sponsored concert featuring Michael Learns to Rock and Christian Bautista.

As the name suggests, The Way You Look At Me: 20th Anniversary Concert, is a special celebration of the OPM artist’s two decades in the music industry where he will serenade fans with his songs from the early days of his career up to now. Aside from the song, “The Way You Look at Me,” The artist’s other hits include “Hands to

TikTok challenge! Christian will sing some of his favorite hit songs from the past 20

years and post on his TikTok, @christianbautista_, and invites fans to duet with him.

(1) Open for participants in NCR only.

(2) Entries should include the hashtag #XTIANBDUETS

(3) A deadline is set for every song. Duets made after the said date will no longer count as an entry.

(4) One winner per song per duet wins one concert ticket

Truly, a lot is in store for the many fans of Asia’s Romantic Balladeer Christian Bautista. But for now, we can’t wait to be serenaded this January 28.