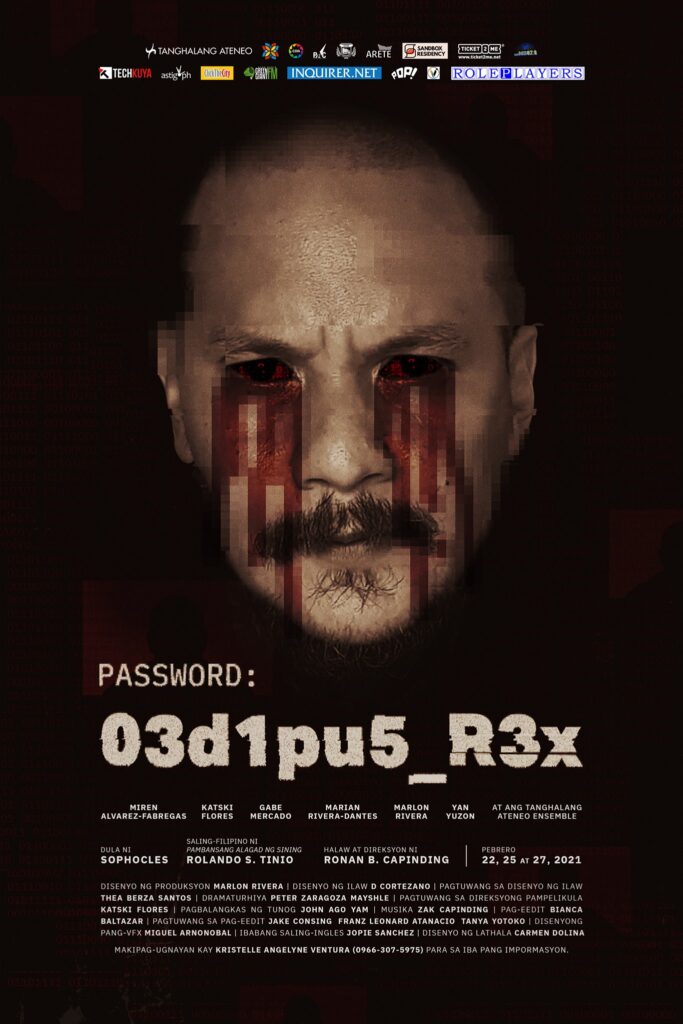 The production is one that will make use of Rolando S. Tinio’s Filipino translation of the play, to be adapted and directed by Ronan B. Capinding.

Password: 03d1pu5_R3x occurs in the current global situation of pandemic isolation and despair, thereby pushing the boundaries of theatrical performance while courageously commenting on the tragedies imminent with the rise of populism within the country and the rest of the world.

Password: 03d1pu5_R3x unfolds in the midst of a national pandemic, with Oedipus serving as the nation’s strongman President. Faced with the need to investigate the unsolved murder of the legislator Laius years ago, identified as the sole culprit of the terrible scourge, Oedipus sets out to uncover the truth—inadvertently exposing his own unwitting involvement as the crime’s perpetrator, for which he himself has declared a draconian penalty.

This innovative production allows the downward spiral into the hard facts of the famed Sophoclean tragedy to mirror prevalent political struggle, ethics in the post-truth electronic age, and the pitfalls of rabid fanaticism, showing that the truths of this ancient Greek tragedy remain just as tragic in the current times.

The show dates of password: 03d1pu5_R3x shall be February 22, 25, and 27, 2021. Tickets are worth 150 PhP for general viewing and Php 250 for general viewing coupled with a souvenir program. Tickets can be purchased through Tanghalang Ateneo’s ticketing partner, Ticket2Me, and their prices are inclusive of the platform’s transaction fee.