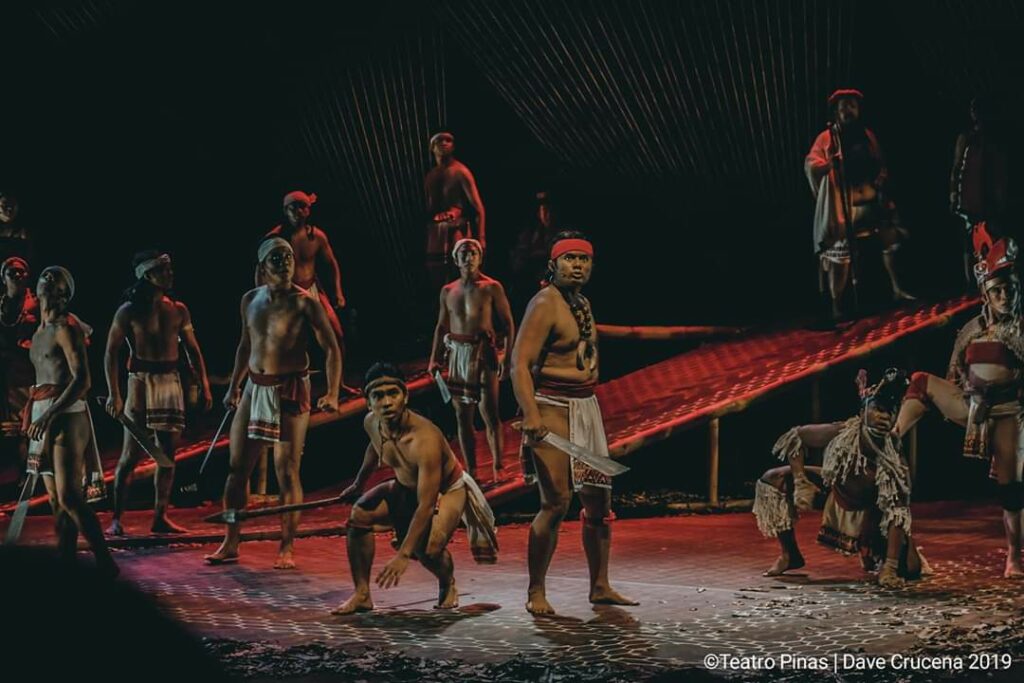 Lam-ang is an ethno-epic musical that re-imagines and reinterprets Biag ni Lam-ang, the oldest among the folk epics of Luzon. This play, which aims to rediscover a significant portion of Philippine culture and heritage, is inspired by the published Ilocano version of Isabelo delos Reyes and Tagalog translations of Angel Acacio and Ariel Tabag.

The musical takes us back to the times when we were our own selves by ourselves in our own little worlds. It chronicles the conquests of Lam-ang from the land of Nalbuan while envisioning local traditions that are being lost, ancient customs and lore that have been forgotten, and vestiges of our affluent past that are in danger of disappearing forever. 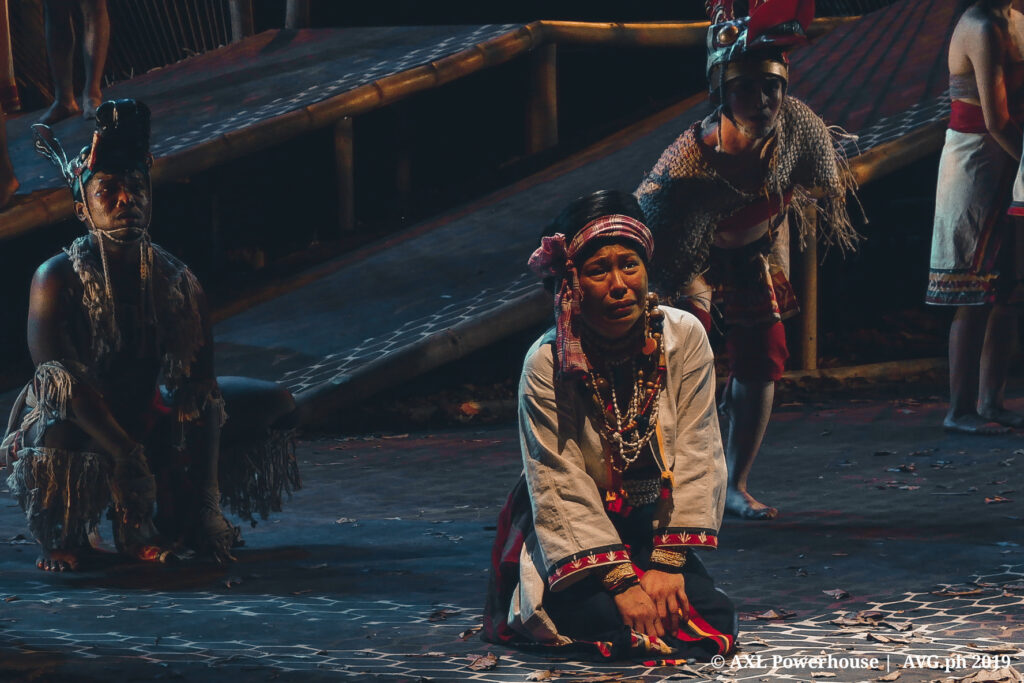 Tex Ordonez-De Leon who played the role of Baglan, did a very powerful performance from the very start of the play, her energy, emotions and passion was all-over the theater. When you say powerful performance, it was more than the technicality and artistry of her performance, deep down you will feel the roots of the song as she takes you to the time where the scene happened. Her performance gave me goosebumps and chills as I listened to her voice and how she delivered the intention and the emotion of the character, as well as the narrative of the story.

Hazel Maranan, who played the role of Namongan, the mother of Lam Ang. As a performer she knows exactly her units and every bits of her character, she knows when to tone down and give her all during her performance. Every time that she delivered her lines you would feel the certainty and passion of her character. She is quite sensitive to her co-performers as knows how to properly respond to every scene, she doesn’t overdo or under do things. 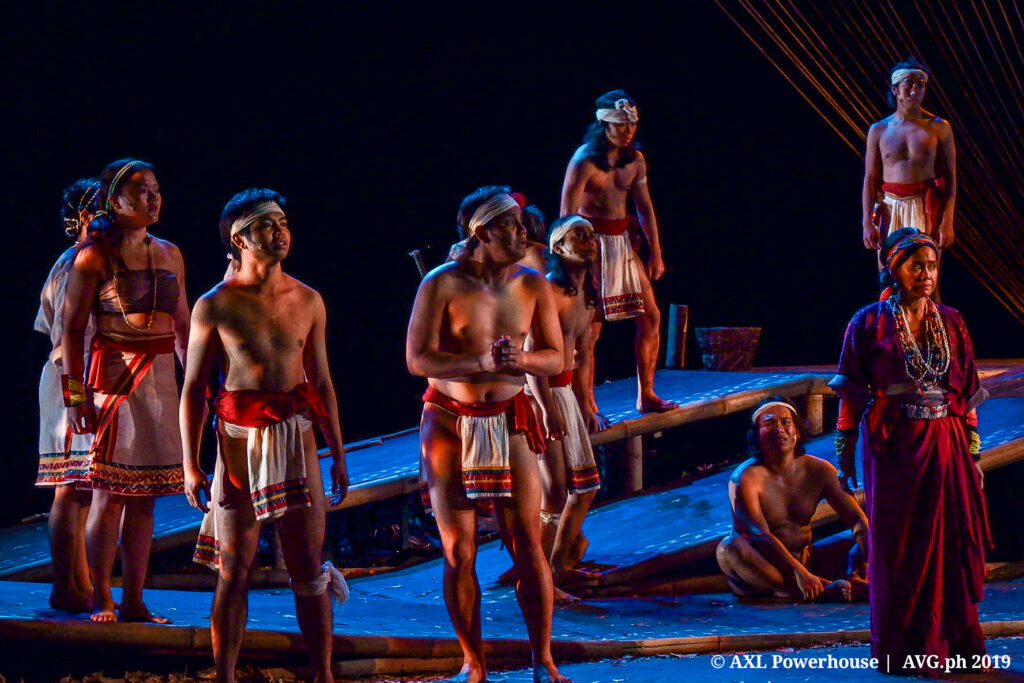 The brilliant Paw Castillo as Sumarang, this performer has gone through a long way and has proven himself many times on stage. He knows how to carry the whole scene when he felt that it was about to fall apart. During the first act, I can feel that there were times that some actors are losing balance and energy during their performance, but this young man knows how to ignite the scene to keep the fire burning. Why not give him the role of Lam Ang instead or maybe consider him as understudy or alternate. In fact, I feel like that he has the guts and the balls to do the character. 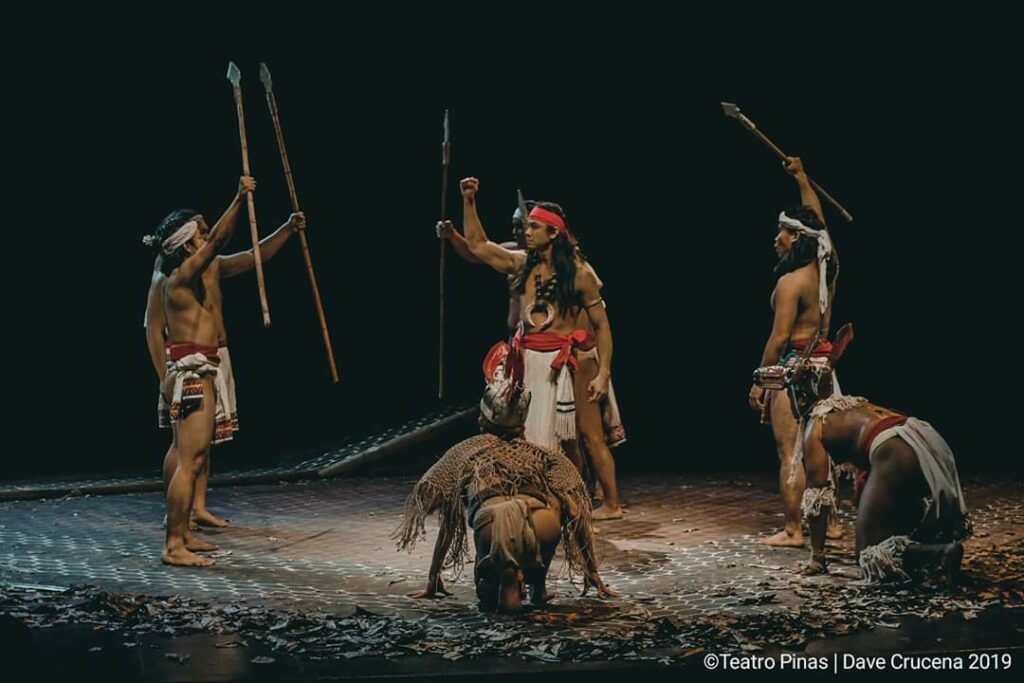 Ka-ul played by Ybes Bagadiong and Taraok played Lance Reblando, the two of the most challenging roles on stage as their characters requires extra effort on the body movements, voice projection and sound. These two gave their best shot when it comes to consistency during the whole performance. They never let go or dropped their character, not even once. Apart from it there are a lot of lifting sequence that adds effort to their characters. Choreography wise, every sequence that they made are well-balanced and complementing each other. Congratulations and well done to both of you!

Anna Luna who played the role of Kannoyan, she owned the character very well. She surprised me on how she gave life to Kannoyan, she made me feel that everything was organic and very natural. I don’t feel like she’s acting when she’s on stage. She analyzed and studied her character very well. From the way she looks, she sounds and move on stage was totally different from her earlier appearance, I did not see Anna Luna, I saw Kannoyan that very moment. 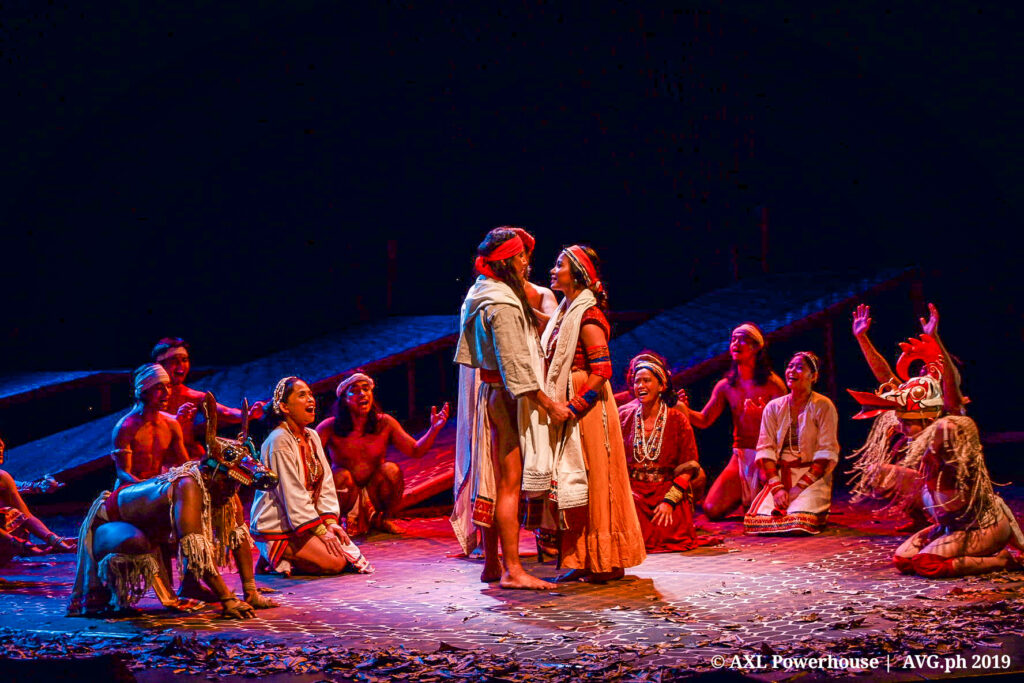 Lam Ang, played by JC Santos. It took him time to warm up on stage as he brought old school style of acting and gestures during the first act. Everything looked too choreographed and stiff during his first three appearance on stage, everything looked awkward. It must have been because of too much projection, as he tried to establish his character. As the story progress, he was evolving little by little until he showed the persona of Lam Ang. To be fair, during the second act, he showed a different version of his character wherein, it was more human and not robotic. Maybe as an audience, I expected a lot from him that’s why my eyes were focused on his every move. 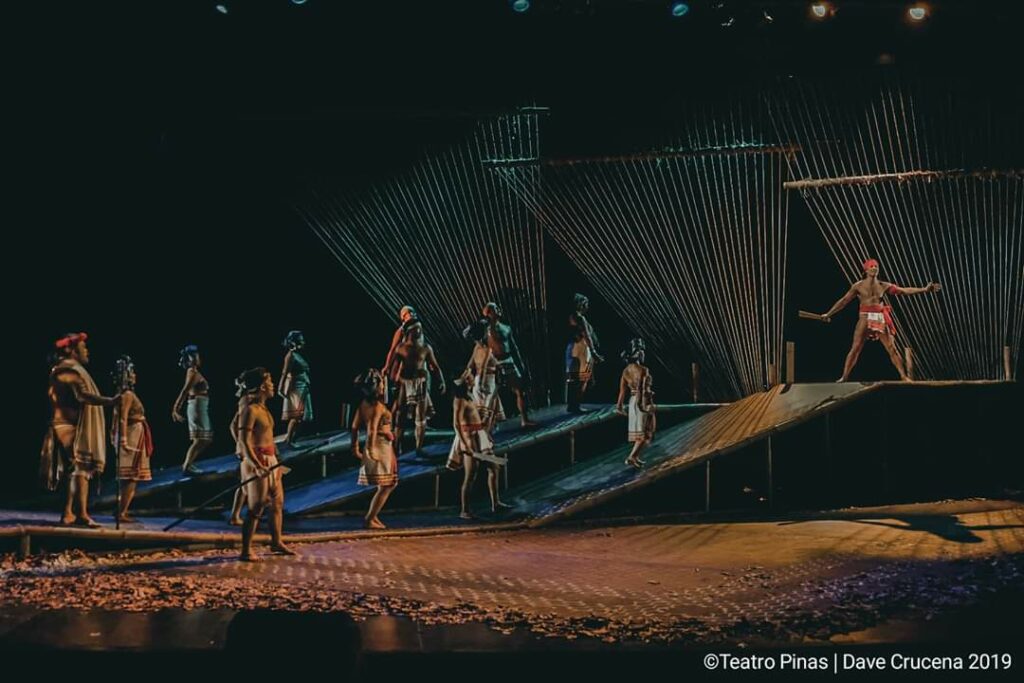 The lighting design of Meliton Roxas, Jr. perfectly complimented the set design of Marco Viana, the variation of lights made everything visually effective. The smart use of the ropes at the back panel gave a generic and yet effective visuals on the set. The tandem may be compared to the visuals of a Disney Live performance. The hue and color of the lights were all refreshing. Every mood of the set would bring you exactly to where they want you to be, from the color of the sunset at the highlands, the calm colors of the riverbanks, the bad weather and deep blue color of the ocean. My favorite part was the set that depicts the water falls. It has simple and yet very effective execution.

The costume design by Bonsai Cielo, she carefully placed every details of the costumes and every patterns that it represented. The costumes showcased the details from different ethnic groups of Cordillera Region, from Abra, Apayao, Benguet, Ifugao and Kalinga. The color of the fabric, the clothing, headdresses, beads accessories and weapons were all correct. Plus of course the creative choices of the costume of Ka-ul and Taraok. 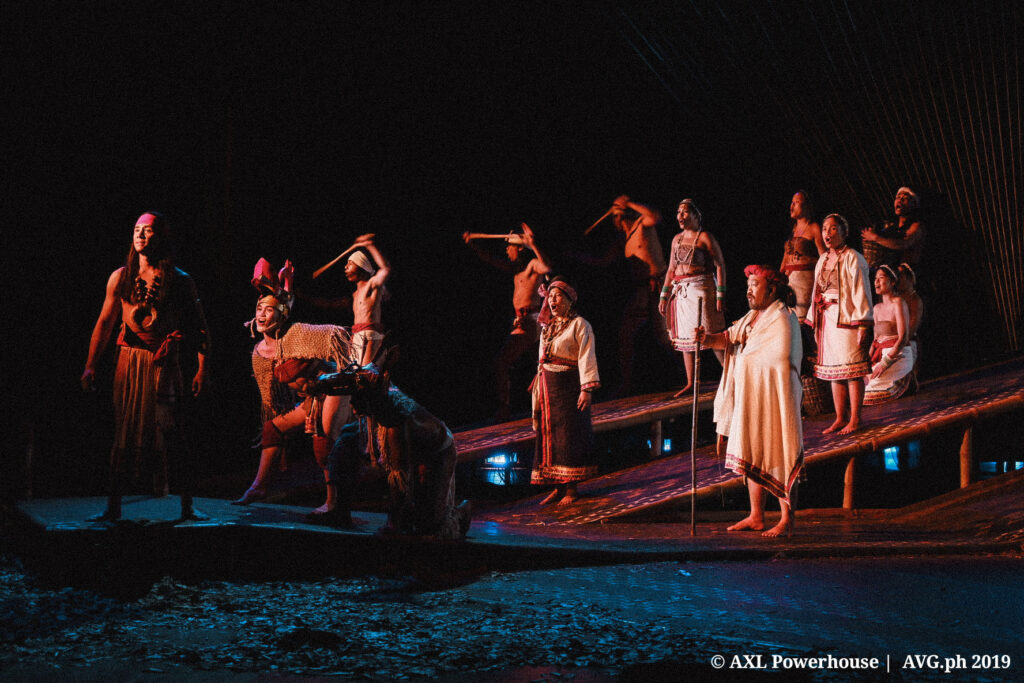 Choreography, JM Cabling’s style would always be noticeable and distinct among other choreographers. Although I have this feeling that it was not well executed during the opening night as the blockings of some sequences were too congested or too concentrated in some areas of the stage. Focusing on the body language and the message that it wanted to convey, everything was effective. It might be different in the future shows as they would point out every details of the blockings and choreography. The music, lyrics and the overall direction, everything was stunning only needs to do some polishing on some weak areas of the performance. Definitely, the play itself would be in demand in the future. The power of every song and dance number were world-class. Everything was visually amazing. The performance was soulful and artistically tasteful. It has a lot of potential and very marketable. The play is for audience of all ages. It teaches a lot of great values and it has a very strong narrative! Lam Ang could be considered as one of the treasures of the Philippine Theater. Padayon Tanghalang Pilipino!