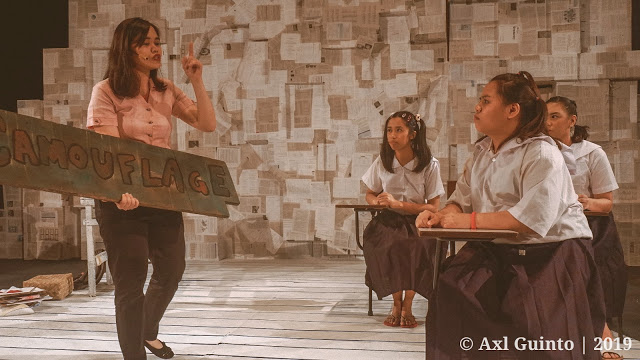 Ang Projector ni Ma’am is about the story of a teacher who’s willing to provide and sacrifice for the sake of her students who’s living in the depressed area in the country, that she almost forgot to look after her own family. It is a sad reality that teachers in public schools would want to provide the best for their students despite of the challenges when it come to the resources. This reflects the negligence of the government to focus on the education system specially to the poor who had limited access not just from books as well as the technology for them to be competitive in this generation.
The over-all appearance of the actors and props for this act was accurate and set the mood to delivered exactly what the playwright wanted to tell. However, I feel that the set of actors are lacking convictions when it comes to delivering what must be delivered until the scene where the teacher talks to her husband. That was the only time that everything was given weight and justice. The narrative was simple and easy to understand, it was straight to the point, but the delivery of lines were monotonous. 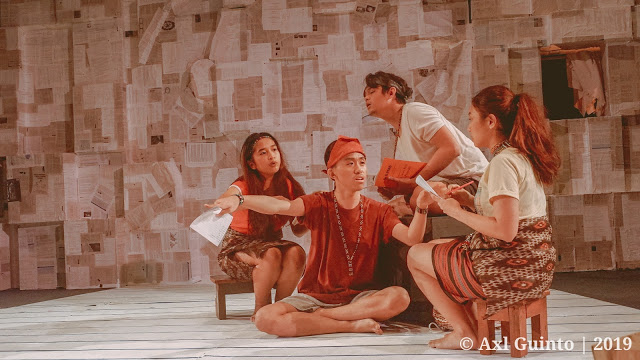 Tser, the story of a teacher to the barrio who wanted to reach out and do her best to help the Lumads of Mindanao. This is the heaviest and most emotional part of the play that even days after I watched the show, the message and the emotion of the play stays with me. It is about the painful reality of suppression of the powerful against the access to education of the ethnic groups in Mindanao. The topic is very important, and it must be seen by many. It’s an eye opening that we are experiencing challenges in Luzon, but there are greater challenges in Mindanao that learning might cause death the youth who aims to be educated and to be able to learn about their basic human rights. No one deserves to be captured that way and it is painful that there are students who doesn’t want to learn while the other one would die just to learn.
This act has the best sets of actors, they know exactly what they’re doing. They know how to convey the message to the audience. The chemistry and exchange of lines were all organic. They made me believe that I was there at the exact situation. I must confess that throughout the performance of the second act, I was holding my tears not just because of its narrative as well as the burning passion of the playwright and the actors. I can’t help but to praise this set. Congratulations everyone! 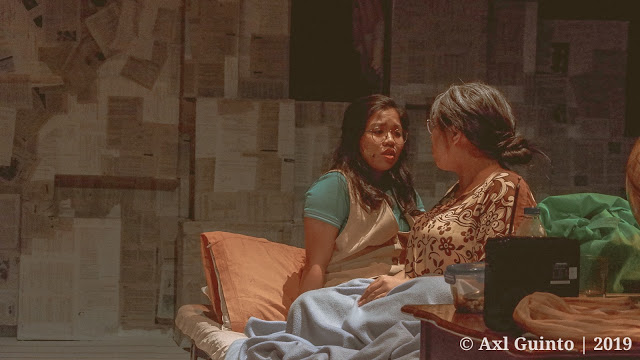 Lesson Plan, tackles personal life of a teacher that even her own happiness was left behind. This is the reality of life that the teachers must hold on to their promises to themselves and they tend to sacrifice their own happiness, mainly because they’re holding on to their reputation. The narrative was fun and poignant at the same time. The set of actors for this act played the emotions of the audiences. It brought us to the fun and exciting journey of a teacher and pinched my heart the moment that the heart breaking scene was revealed. How I wish that the society can be more open minded and not judgmental to each and everyone so that people would not need to sacrifice their happiness. Beyond the reality of life the piece has a strong message about sacrifice, happiness and social awareness. The direction and the execution of the piece was well done and not flat. Everything was done with perfection except to some unexpected technical challenges but they were able to cope with it.
To the whole production of TITSER KO SI LA SALLE! congratulations and thank you for sharing this kind of important issues in the society. More power! Padayon!
More photos of DLSU Harlequin Theatre Guild present TITSER KO SI LA SALLE! at the official page of Teatro Pinas facebook.
Review : JC Salud
Photos : Axl Powerhouse Network