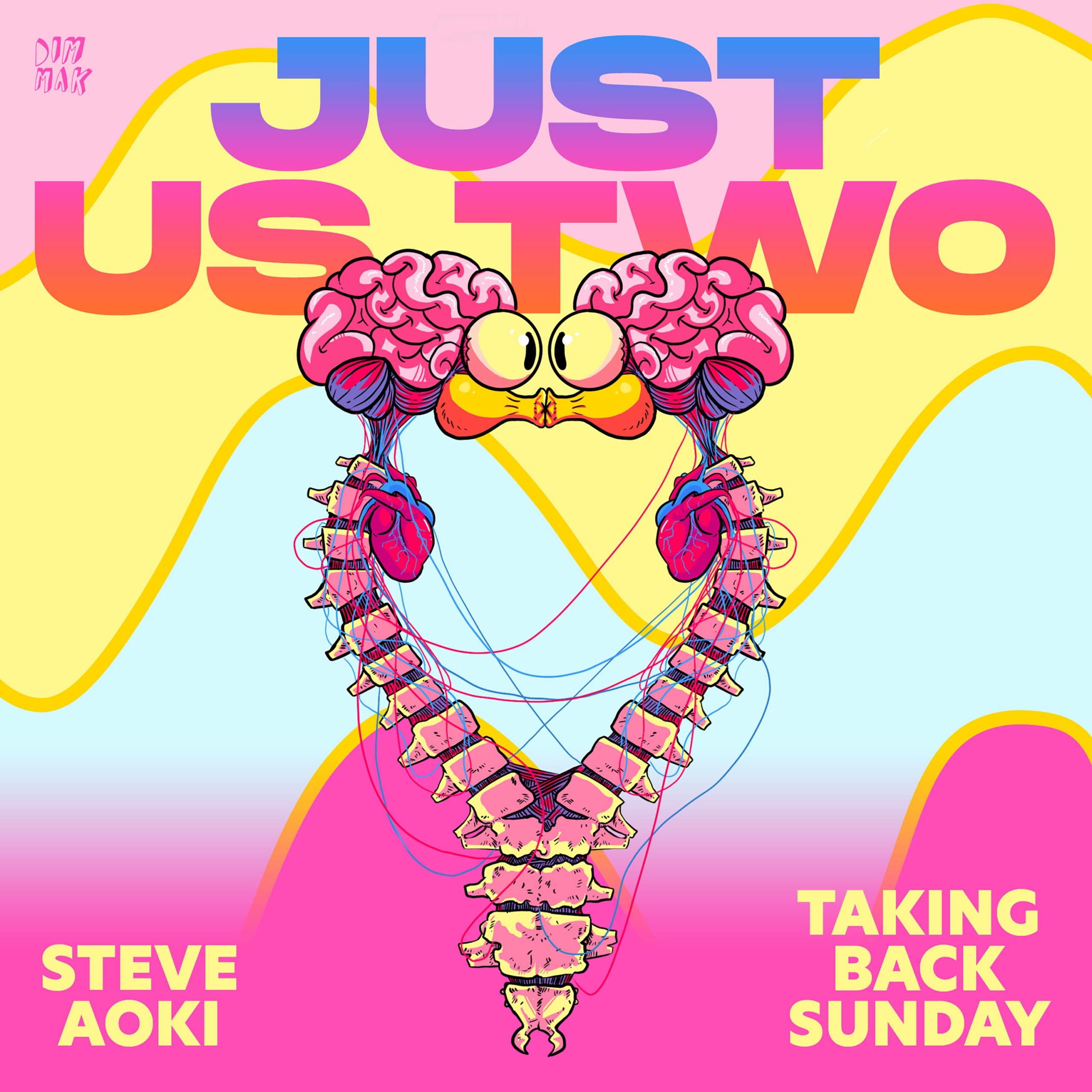 2x-Grammy-nominated artist and producer Steve Aoki teams up with Taking Back Sunday for the new high-octane single “Just Us Two.”

The new song is a full-circle moment for Aoki. It finds him leaning into the alternative roots of the start of his career with his record label Dim Mak in his college dorm room, championing music from acts like The Kills and Bloc Party. Now, with their performance on “Just Us Two” Aoki and Taking Back Sunday made the recording in the studio “old school style,” according to Aoki. It was written by the entire band and Steve from scratch during a late afternoon studio session only a few months ago. Taking Back Sunday offers their signature vocal stylings to the song while the energy of Aoki’s production brings a cinematic element that gives the song a dynamic cross-genre appeal.

The technicolor, neon-lit music video finds the artists rip-roaring through an eerie motel, reverberating a performance of “Just Us Two,” surprising guests in the airwaves and on television screens.

Aoki shares, “I met up with Taking Back Sunday in Charlotte, North Carolina and we recorded the song live in a physical recording studio, honing in on the group’s powerful instrumentation. I come from a punk background and it’s always so good to work with artists that share the same passion for live music. This record encapsulates both of our roots while maintaining the Aoki elements that bound the track together.”

Adam Lazzara of Taking Back Sunday says, “Getting a call asking if we wanted to write with Steve Aoki was very surreal. Steve comes from a very similar background as we do, house shows, DIY labels, the whole thing. We were listening back to different ideas he had, and one guitar part in particular caught our drummer Mark’s ear. We approached it in the same way we do our own songs, and we couldn’t be happier with the outcome. Turns out our worlds aren’t as far apart as people might think.”

Taking Back Sunday are gearing up for a major summer tour across the US as direct support for Third Eye Blind, and have upcoming show dates with My Chemical Romance. They’re also one of the top billed acts for the upcoming When We Were Young Festival in October. Meanwhile, their hit song “Loved You A Little” with The Maine and Charlotte Sands is taking over the airwaves currently sitting at #8 on Alternative radio. More to come this year from Taking Back Sunday, who are working on their greatly anticipated eighth studio album.

As for Steve Aoki, the adventure never pauses as he was recently honored as Adweek’s Creator Visionary of the Year, given the Icon Award at the APAICS Gala in Washington DC, and performed at the Indy 500 in Daytona. Always down for an adventure, both acts bring their A-game to “Just Us Two” finding time amidst the chaos to hit the studio for the new all-out rocker.