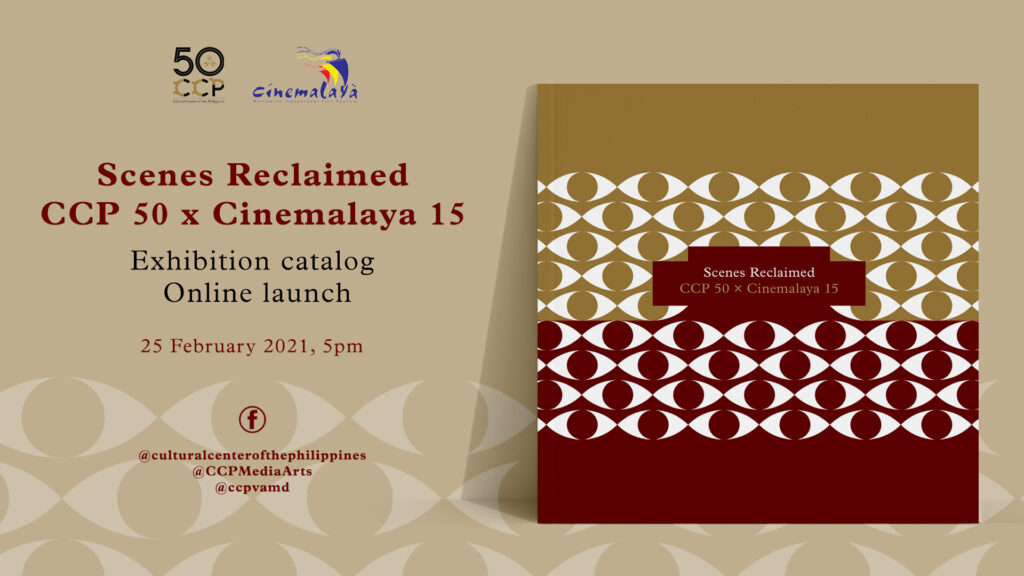 Join us on Facebook live this Thursday, February 25 at 5pm, as we launch a publication in line with our 2019 exhibition, Scenes Reclaimed: CCP 50 x Cinemalaya 15, a joint project of the CCP Film, Broadcast and New Media Division and the CCP Visual Arts and Museum Division.

The rise of the Cultural Center of the Philippines (CCP) along Manila Bay set in motion a series of irrepressible reclamations that endure until today. As a monumental construct whose final definition remains suspended, the CCP has served as both venue, a site for the contestation of the meaning of nation, and avenue, a route for approaching the internal contradictions of and making progress toward national cinema. Its history, which has harbored opposing ideals of culture and witnessed the opposition of state and society, spans half of Philippine cinema’s first century. Cinemalaya, emerging in 2005, was a practical and discursive outworking of these contending political and ideological strains.

Through images, objects, and motion pictures, the exhibit Scenes Reclaimed traced the interrogation of “independent” cinema in view of historical pursuits of freedom in the national narrative. This book, apart from serving as a catalog of the exhibit, is also an educational material for Filipino students and makers of film, a compendium of keywords for a critical pedagogy of Philippine cinema.

To revisit Scenes Reclaimed, you may view the exhibit at the third floor of the CCP Main Theater building in CCP’s 360 tour.