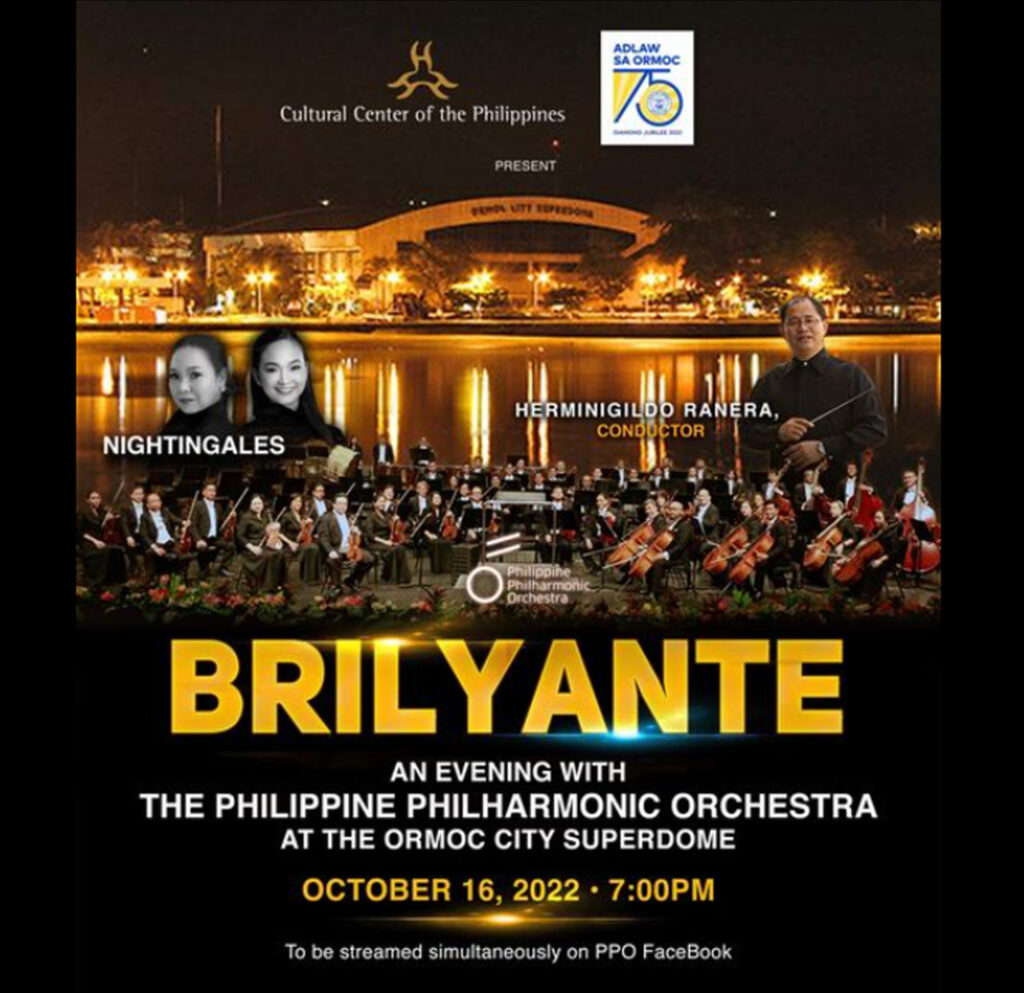 PURSUANT to the Cultural Center of the Philippines’ mandate to cultivate and enhance public interest in, and appreciation of the various arts including but not limited to the performing arts throughout the country, the Philippine Philharmonic Orchestra will be performing at the Ormoc City Sky Dome in Leyte on October 16 at 7 pm.  The concert is free to the public.

Billed as Brilyante: An Evening with the Philippine Philharmonic Orchestra, the PPO will treat the Ormocanons to a night of music with Georges Bizet’s ‘Les Toreadors’ from Carmen suite no.1 and Peter Ilich Tchaikovsky’s ‘Danse of Reed Flutes’ from The Nutcracker Suite.  They will also be performing Johann Strauss Jr.’s ‘On the Beautiful Blue Danube Waltz’, Arturo Marquez’s ‘Danzon No. 2’, Leroy Anderson’s ‘Sereneta’, and Franck Porcel and Paul Mauriat’s ‘I Will Follow Him’.

The Nightingales will be the guest performers at the concert.

PPO will also perform OPM pieces including Best of Metropop, FPJ Medley, D’Manila Sound, Usahay, When I Met You and Hagibis Medley.

The following day, October 17, selected members of the PPO will conduct simultaneous masterclasses for Woodwinds, Brasses, and Percussion instruments at the Ormoc Multi-Purpose Hall at 10 am.  On the same day, the PPO will stage another performance at Robinson Ormoc Activity Area at 7 pm.

Established in 1973 as an accompaniment for the performing artists at the CCP Theater, the Philippine Philharmonic Orchestra has become the country’s leading orchestra and is widely regarded as one of the best musical ensembles in the Asia-Pacific region. It has performed with world’s renowned conductors including Mendi Rodan, Piero Gamba, Enrique Batis, Sebastian Bereau and Nicholas Koch, as well as performed with the best foreign and Filipino artists such as Van Cliburn, Renata Tebaldi, Judith Engel, Anthony Camden, David Benoit, Cecile Licad, Raul Sunico and Lea Salonga.

This particular PPO outreach concert is made possible with the support of the City Government of Ormoc.