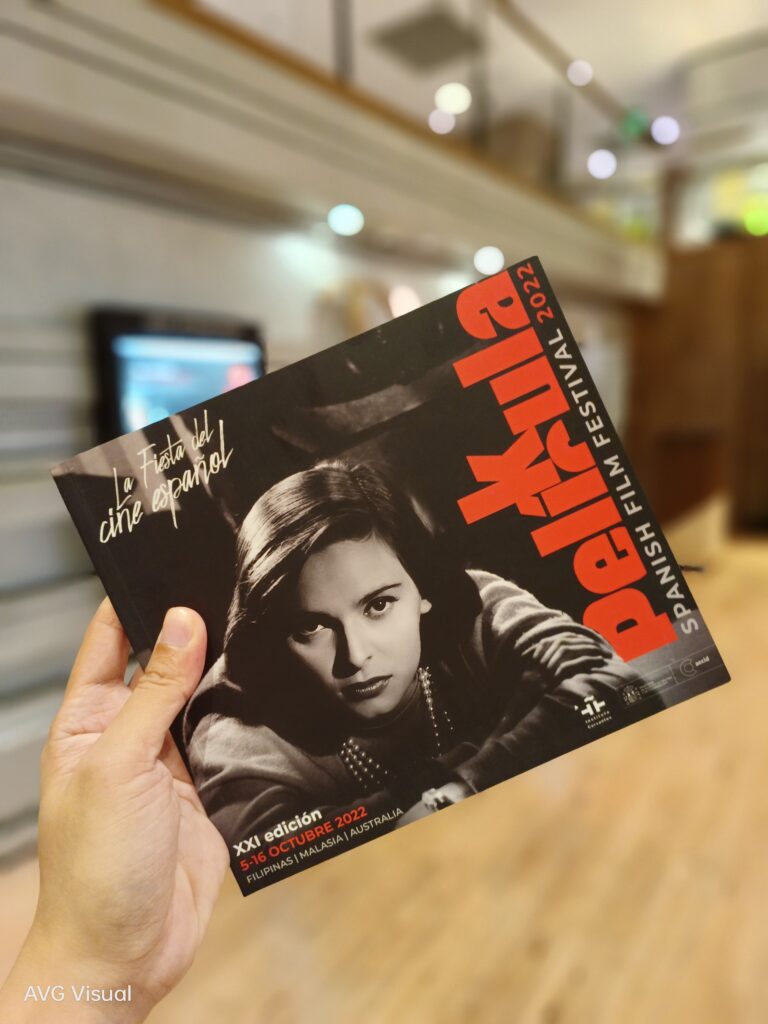 For its 21st edition, PELÍCULA Spanish Film Festival runs at the Shang for the first time.

From October 5 to 16, 2022, the 21st edition of PELÍCULA-Spanish Film Festival will return to in-person screenings. After two years of having a virtual festival, PELÍCULA will screen more than twenty movies in three venues of Metro-Manila-Edsa Shangri-La Plaza, Cine Adarna at UP Diliman, and Instituto Cervantes Intramuros branch.

Since its creation in 2002 by Instituto Cervantes de Manila, PELICULA has been an annual attraction in Philippine theatres. After the Covid-19 crisis, which forced cinemas to close worldwide and caused audiences of PELÍCULA to migrate online, the festival returns to the big screen, on a first-come, first-served free admission basis. Furthermore, as well as in-person screenings in Metro Manila, the Festival will also host online screenings for the Philippines, Malaysia and Australia.

PELÍCULA Spanish Film Festival is showcasing 13 movies at Red Carpet at the Shang kicking off with El buen patron. It’s a 2021 comedy directed by award-winning screenwriter and filmmaker Fernando León de Aranoa and starring Oscar winner Javier Bardem. It’s about an owner of an industrial scales manufacturing business who tries to get his company an award in excellence while resolving problems with his workers at the same time.

Other comedy movies in the lineup include El test, a 2022 Dani de la Orden flick about a broke couple who have to decide whether to get €100,000 now or €1,000,000 10 years later, and Con quién viajas, a dialogue-heavy road film full of comical situations and thrills and tension. It’s directed by Martín Cuervo and released in 2022.

More feel-good films are screening at the festival. La boda de Rosa is a 2020 romcom film by Iciar Bollain that portrays a burnt-out woman in her mid-40s who sets out to start anew by marrying herself. Sentimental is a 2020 Cesc Gay film about two couples who explore the secrets of keeping the fire alive in long-term relationships. Rendir los machos, a 2021 David Pantaleon film, tells the story of two brothers who are forced to move their cattle across the wild and hand over them to their greatest rival to receive the inheritance from their father.

The festival also screens documentaries like the 2022 Laura Hojman film A las mujeres de España; María Lejárraga that tells the story María Lejárraga, writer and pioneer of feminism in Spain during the 1920s; and thrillers like La hija, Manuel Martín Cuenca’s 2021 movie about a pregnant teenager from a juvenile detention who agreed to give her baby to a couple desperate to have a chill.

It lso features dramas such as Maixabel, a 2021 Icíar Bollaín production based on a true story of a widow who met one of her husband’s assassins in prison after breaking ties with the Spanish separatist group ETA, and El olvido que seremos, a 2020 Colombian film by Fernando Trueba about an author recounting his life with his father who fought against oppression and social inequality and killed by Colombian paramilitarie.

PELÍCULA is also promoting Latin American films such as the Panamenian romcom Algo azul García Spooner, 2021) on a hotel employee who steals an expensive wedding dress; and Competencia oficial, a 2021 Spanish-Argentinean comedy directed by Gastón Duprat and Mariano Cohn, and led by Penélope Cruz, Antonio Banderas, and Oscar Martínez. It’s about a wealthy businessman who wants to produce a brilliant art film.

To celebrate its 21st edition, PELÍCULA is going to screen a celebrated classic Spanish film, the Cannes winner Muerte de un ciclista (Juan Antonio Bardem, 1953), which is a social realist Spanish drama about an adulterous pair of lovers whose lives are about to turn around after hitting a cyclist.

As part of its longtime tradition, the festival is encouraging moviegoers to vote for their favorite entry. The film with most votes will receive the Audience Choice Award and will be screened again on PELÍCULA’s closing night. All the movies are in Spanish or their original language with English subtitles. Catch one of the most beloved cultural events in the country, don’t miss the PELÍCULA Spanish Film Festival for the first time at the Red Carpet in Shangri-La Plaza starting October .

All the screenings are FREE entrance. All the movies are in Spanish (or their original language) with English subtitles. For updates on the Festival, please visit the website of the Festival (https://pelikula.org), or the Facebook page.