OFALSA AT SUNICO AN ONLINE FUNDRAISING CONCERT FOR SCHOLARS SET ON FEB. 5

OFALSA AT SUNICO AN ONLINE FUNDRAISING CONCERT FOR SCHOLARS SET ON FEB. 5 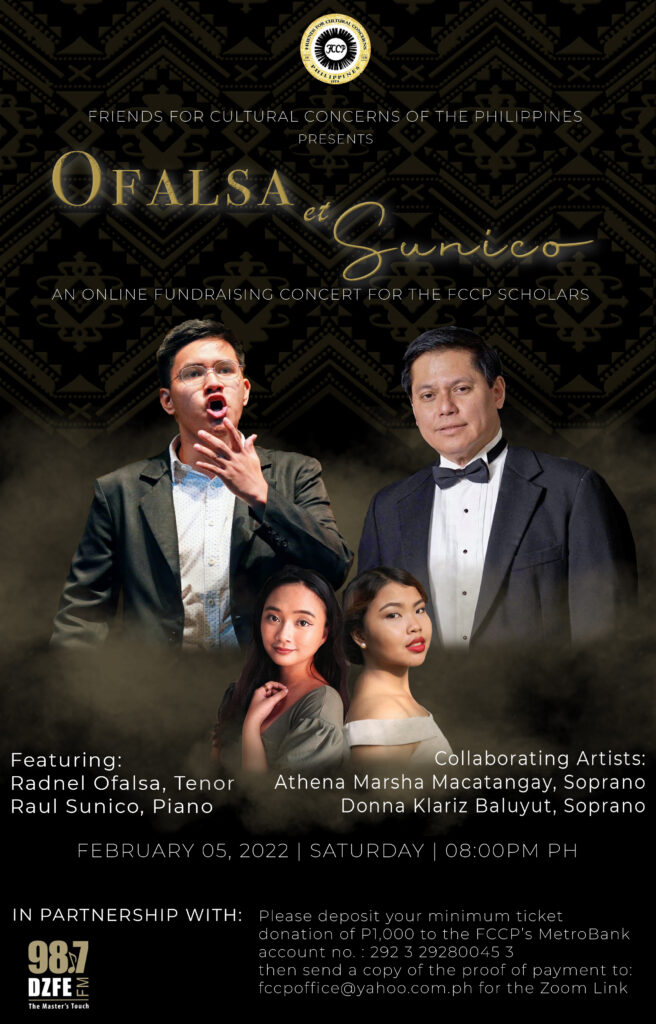 In the last two years of lockdown, the Friends for Cultural Concerns of the Philippines has been hardpressed to raise funds to continue supporting its 28 student-artist-scholars.

To continue a successful attempt to fundraise by means of an online recital of some of its scholars, the FCCP will feature tenor Radnel Ofalza with pianist Dr. Raul Sunico, who also chairs the Scholarship Committee, in a recital on February 5 at 8PM (Philippine time) via Zoom.

Radnel, who has been a scholar of the FCCP since he was a college student at the University of Santo Tomas is now taking his Masters in voice at the Mannes School of Music in New York City.

Other FCCP scholars who will participate in this online production are sopranos Athena Marsha Macatangay and Donna Klariz Baluyut.

In 1979, concerned over the dwindling audience attending performances in the Cultural Center of the Philippines, a group of ladies bonded for the purpose of helping to raise and address some of the cultural concerns of the country.

These culturally inclined ladies formed the nucleus of the Friends of the Cultural Center of the Philippines (FCCP). Consuelo “Chito” Madrigal, was the Founding Chairman and first President of the FCCP.

Embarking on their first venture into fundraising, the FCCP sponsored the musical Annie, which first introduced Lea Salonga. With the proceeds from this event, a brand new harp was purchased and donated to the CCP Orchestra, now the Philippine Philharmonic Orchestra.

On March 1, 2001, the incorporation papers and by-laws of the FCCP were amended. The organization assumed a new name: Friends for Cultural Concerns of the Philippines while retaining the acronym FCCP.

From that time until the present, the FCCP has involved itself in fundraising activities for the organization to give scholarship grants and financial assistance to deserving student artists as well as to cultural institutions.

During the 2004 – 2006 term of Amelia ”Mellie” Romero Ablaza, the FCCP embarked on two highly challenging initiatives. First, the “Introduction Room” of the National Art Gallery
was named after the FCCP in perpetuity; and second, the FCCP Board unanimously voted to purchase an office condominium unit at the Cityland Herrera Tower. Ever since the FCCP has had a permanent address and a home of its own.

The enthusiasm and camaraderie exuded by the original group have attracted many others.
The FCCP’s membership has grown in number. In its forty-two years of experience
and existence, the FCCP can justifiably claim undeniable success as a leading cultural arbiter of this nation.

Unfortunately, due to this pandemic the FCCP could not hold its traditional annual fundraisers, preventing the acceptance of new scholars.

The FCCP’s main objective for now is to ensure the continuity of support to the existing 28 scholars until they graduate.

To date, we have scholars in prestigious institutions like the University of Sto. Tomas,
University of the Philippines, St. Paul University Manila, Centro Escolar University
and the Mannes College of New York, USA.