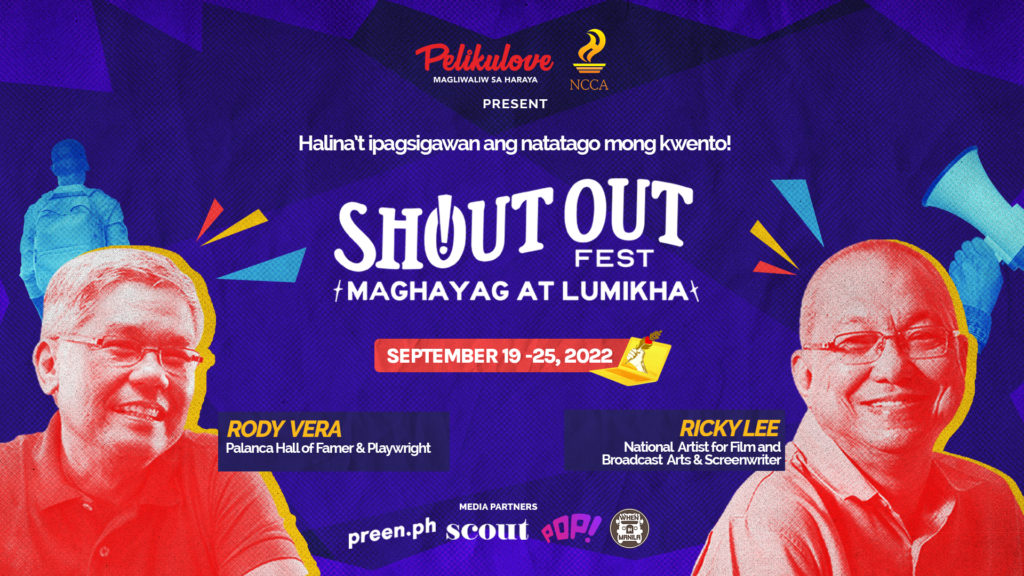 Pelikulove, a multi-arts portal that aims to provide arts education and a platform for artistic and socially-relevant content, is launching the first-of-its-kind “Shout Out Fest (Maghayag at Lumikha)” Online Festival from September 19 to 25, 2022.

In cooperation with the National Commission on Culture and the Arts, the “Shout Out Fest” is a seven-day online festival of short films and stage plays, a culminating activity of the enrollees of the Pelikulove master classes of National Artist for Cinema and Broadcast Arts Ricky Lee, and Palanca Hall of Fame awardee Rody Vera. The works are produced in cooperation with regional theater and film organizations and can be viewed for free at pelikulove.com beginning September 19.

Three sets of works are to be showcased; each set is composed of three productions.

Set B features the short films “No Trespassing” set in the sugar plantations in Bacolod written and directed by Dada Grifon and co-directed by Julius dela Peña of the LaSalle Film Society of Bacolod   and “Till Human Voices Wake Up and We Drown”, about mambabarangs now working as nurse and caregiver, also from the UK group, written by Rogelio Braga and directed by Nyel Camilon, and the short play “Ilaw sa Labas ng Tahanan” , on two women trying to cope with their husband’s deaths, written by B. Salvador and directed by Benjie Kitay of the theater company Yatta in  Dumaguete.

Set C features the play “When a Manananggal Loves a Man” by Raymund T. Barcelon and directed by Neil Azcuna of Ipag theater company, of MSU-Iligan Institute of Technology, and the short films from the UK “Cooking with Love” written by Viva Andra O’Flynn and directed by Delfin Castillo; and  “Libro for Ransom” tackling the theft  of Jose Rizal’s masterpieces written by Ralph Morales and directed by Arjanmar Rebeta.

Aside from the short films and plays, the “Shout Out Fest” Online Festival will also present virtual learning seminars, talkbacks, Q&As with artists and mentors. Festival visitors will have access to e-books, self-paced courses on playwriting and scriptwriting and other arts and culture-related content.

Organizers would like to reiterate that the access to the festival’s content is free. However, due to the platform’s limitations, only selected audiences can join through prior arrangements. Early registrants have a chance to avail of  e-books by Ricky Lee, Rody Vera and film critic Joel David ,without any fee.

Pelikulove’s founder and President Ellen Ongkeko Marfil declare, “We are very excited to hold the first ever ‘Shout Out Fest’ as this festival epitomizes Pelikulove’s mission of nurturing an engaging and open environment towards building a creative community. We’d like to show that art is the soul of our lives and it must continue to thrive even in the midst of a pandemic. Now, more than ever, is the time to shout out our fears and triumphs, and shout out for the future.”