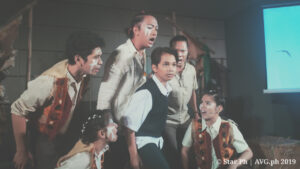 “Moymoy Lulumboy Book 6: Ang Ugat at ang Propesiya” Kuwento ni (story by) Segundo Matias Jr., Guhit ni (illustrations by) Jomike Tejido focuses on the teenage life of Moymoy and about the imperative decision that he has about to make. In the book as described by the writer himself during the book launch, Moymoy is living the life of a teenager who is curious in exploring about things that they enjoy at their age. 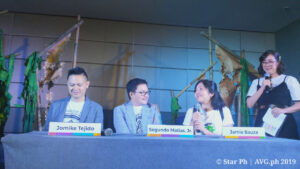 Segundo Matias wanted to make everything realistic on the human side of the character. In book six, Moymoy is described to be in an environment where he is comfortable, popular and happy until he was called to fulfil his prophecy. Since the series reached the sixth book and reach the age where Momoy is no longer a child, Kuya Jun (Segundo Matias) also added that readers might be surprised about the changes on his life, the changes on the way how he do things because, Kuya Jun wanted to make the character of Moymoy organic as possible. In fact in this book Moymoy is starting to have a relationship. 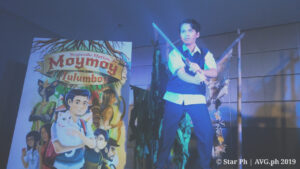 When it comes to the illustrations, according to Jomike Tejido, he becomes more free in exploring the changes, since the characters have grown up, the limbs of some illustrations are longer and the facial features becomes sharper. During the book lunch, Jomike and Kuya Jun shared how they come up with the changes and how they worked together. That time I realised that the key in creating a collaborative masterpiece is to allow each other to explore and grow on their own. It was funny that sometimes, according to Kuya Jun, Jomike used to follow up on what was about to happen on the story instead of the him dictating everything. Only proves that the writer allows so much space for his illustrator to explore create more.

When he was asked if there’s a chance of having a seventh book, he said that there is a possibility, although there are some changes on the uniformity of how he started the format from the previous books. I also had a chance to ask him whilst he was signing books about, what inspires him to keep on writing? He smiled and said that it’s all about the readers, the children or the young ones who loves reading his book.

Segundo Matias is also the author of “Mga Batang Poz” a story that is timely due to raising case of HIV in the country. The book which aims to bring awareness about HIV and how to deal with people with living with HIV. An important story that reached different platforms to educate the public.