JC Stewart’s collab with 220 Kid for ‘Too Many Nights’

JC Stewart’s collab with 220 Kid for ‘Too Many Nights’ 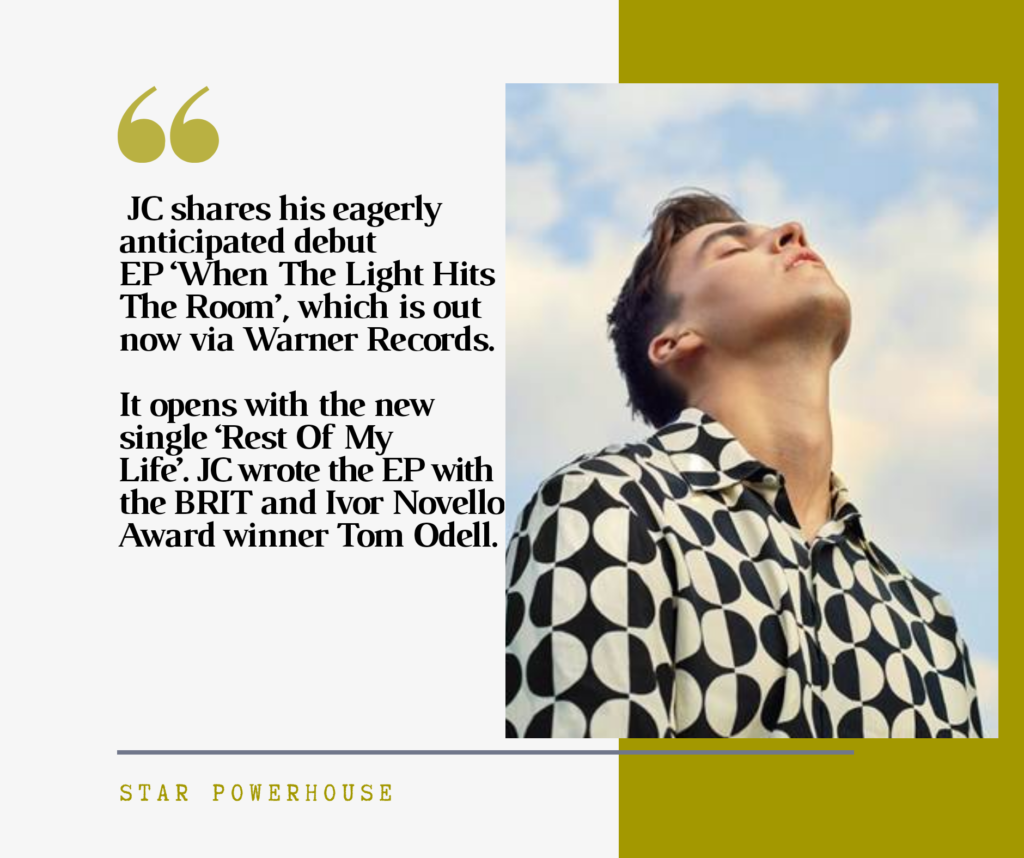 JC Stewart’s collab with 220 Kid, ‘Too Many Nights’, has kept the young artist’s profile riding high as he looks set to become one of 2021’s biggest breakthrough artists. Now JC shares his eagerly anticipated debut EP ‘When The Light Hits The Room’, which is out now via Warner Records. It opens with the new single ‘Rest Of My Life’. JC wrote the EP with the BRIT and Ivor Novello Award winner Tom Odell.

“I wrote ‘When The Light Hits The Room’ about growing up and searching for the end goal that would make everything make sense,” says JC Stewart. “I realised that the finishing point might not even exist, but came to accept that it’s ok. I wrote a lot of this EP in the back room of my parents’ house over lockdown and then was lucky enough to work with one of my heroes, Tom Odell, to bring it all together. I’m unbelievably proud to call my first ever small body of work.”

The EP’s lead track ‘Rest Of My Life’ perfectly captures that concept. Driven by JC’s candid admission “I just want to find someone that I can spend the rest of my life with,” the song’s compellingly unguarded subject matter is magnified by the production. JC’s spine-tingling voice is enriched with subtle creative twists to elevate his harmonies and backing vocals. Meanwhile, buoyant and pulsating percussion provides a modern pop feel that enlivens his lovelorn lyricism.

The remaining tracks reiterate the strength of the duo’s collaboration. ‘Valium’ is a hymnal declaration of a fractured relationship that builds into a climactic crescendo, before the plaintive piano of ‘Friday Night’ craves the brief respite from day-to-day life that the weekend brings. It ends, however, on a high. ‘Hard To Believe’ suggests that the hopes he expressed in ‘Rest Of My Life’ are coming true, with a tender celebration of how “a girl like you should never love a man like me.”

JC Stewart launched the EP last night with a special acoustic livestream show, hosted at The Luney in his hometown of Magherafelt in Northern Ireland. After debuting new songs alongside some fan favourites, JC followed his set by inviting questions for a Q&A session.

JC will kickstart a big year ahead of him in 2021 by sharing his boldest pop moment to date in the shape of his huge upcoming single ‘Break My Heart’. Set to arrive on January 8th, the track will be JC’s first ever vinyl release and will also be released digitally. Launched at last night’s show, ‘Break My Heart’ is now available to pre-order at ADD LINK.

The young musician has been embraced by the wider music community. He co-wrote ‘Hollywood’ from Lewis Capaldi’s smash hit debut album and has played shows with his old friend, as well as artists such Lauv, Anne-Marie and Maisie Peters. The depth of his songwriting is countered by his quick wit self-deprecating sense of humour. That resulted in him going viral with his quarantine-themed take on the ‘Friends’ theme ‘I’ll Be There For You’, which featured on ‘Good Morning America’.

‘Too Many Nights’ was playlisted at Radio 1, Radio 2, Capital and Kiss as a new audience discovered his burgeoning talent. It followed JC’s biggest track to date, ‘I Need You To Hate Me’, which exceeded 30 million streams. His earlier releases, including ‘Lying That You Love Me’ and ‘Pick Up Your Phone’, have resulted in his monthly listeners at Spotify climbing to 2.5 million, assisted by countless New Music Friday playlists.

‘When The Light Hits The Room’ tracklist: