JACK WHITE is coming to Manila on November 5, 2022

JACK WHITE is coming to Manila on November 5, 2022 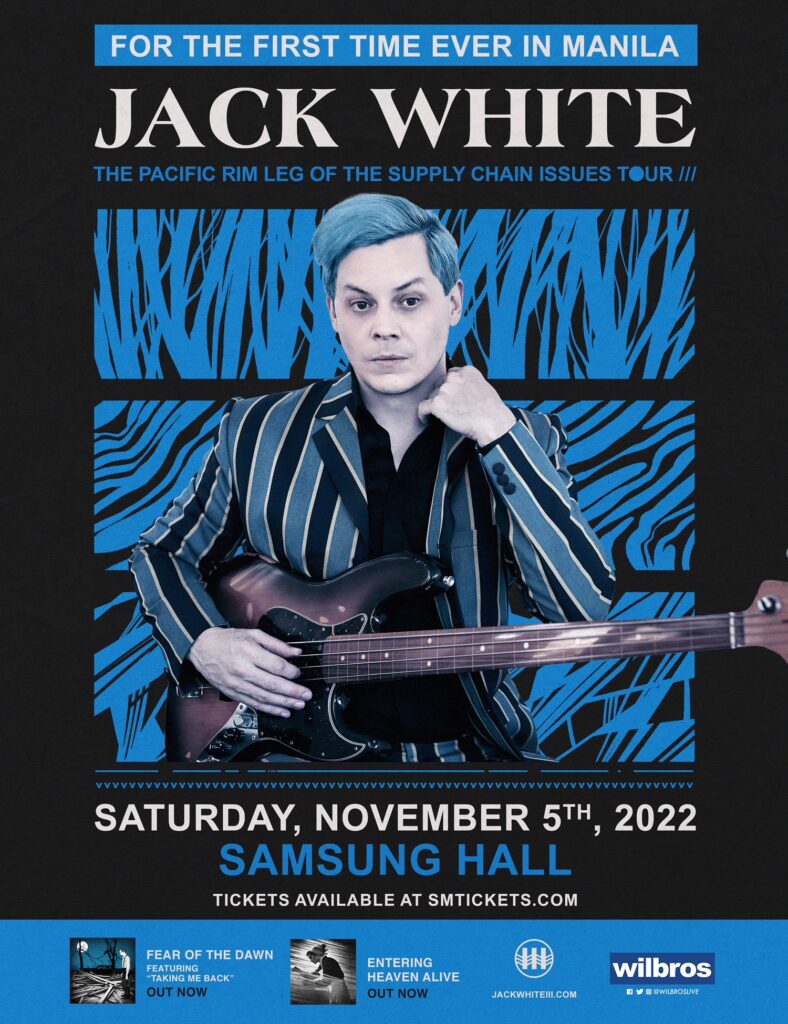 Founding member of The White Stripes, The Raconteurs and The Dead Weather, JACK WHITE is coming to Manila on November 5, 2022, at the Samsung Hall in SM Aura Premier for his The Supply Chain Issues Tour. Tickets go on sale to the general public on September 23, 10AM via SMTickets.com and all SM Tickets outlets nationwide.

The 12-time GRAMMY® Award-winner and 36-time nominee, and Third Man Records founder, is set to release his fourth and fifth solo studio albums in 2022. FEAR OF THE DAWN (Third Man Records), featuring his latest single “Taking Me Back,” was released on April 8th, 2022 and ENTERING HEAVEN ALIVE (Third Man Records) followed on July 22, 2022.

In addition to writing global anthems such as The White Stripes’ “Seven Nation Army” and The Raconteurs’ “Steady, As She Goes,” all three of White’s acclaimed previously released solo albums – 2012’s RIAA gold certified solo debut, BLUNDERBUSS, 2014’s LAZARETTO, and 2018’s BOARDING HOUSE REACH – debuted at #1 on the SoundScan/Billboard 200 along with a variety of other charts.

LAZARETTO proved equally popular with GRAMMY® voters, scoring a nomination as “Best Alternative Music Album,” while its title track received the 2015 GRAMMY® Award for “Best Rock Performance” as well an additional nod as “Best Rock Song.” Praised by NME as “wild, mysterious and unlike anything else around…a full, lush sounding thing packed with personality and life,” BOARDING HOUSE REACH proved among White’s most unique works, topping a variety of charts in the US and Canada while drawing applause around the world.

“The spirit of freaky free-play is thrilling and refreshing, a worthy end unto itself,” wrote Rolling Stone. “Like nearly all of White’s work, it manages to feel fresh, original, and still deeply rooted in history.”

In 2020, White released The White Stripes Greatest Hits (Third Man Records/Legacy) and, more recently, unveiled jackwhiteartanddesign.com, as well as opened the doors to Third Man Records London – the third Third Man Records location and first internationally. White will be embarking on a worldwide tour in 2022 to support his new albums.