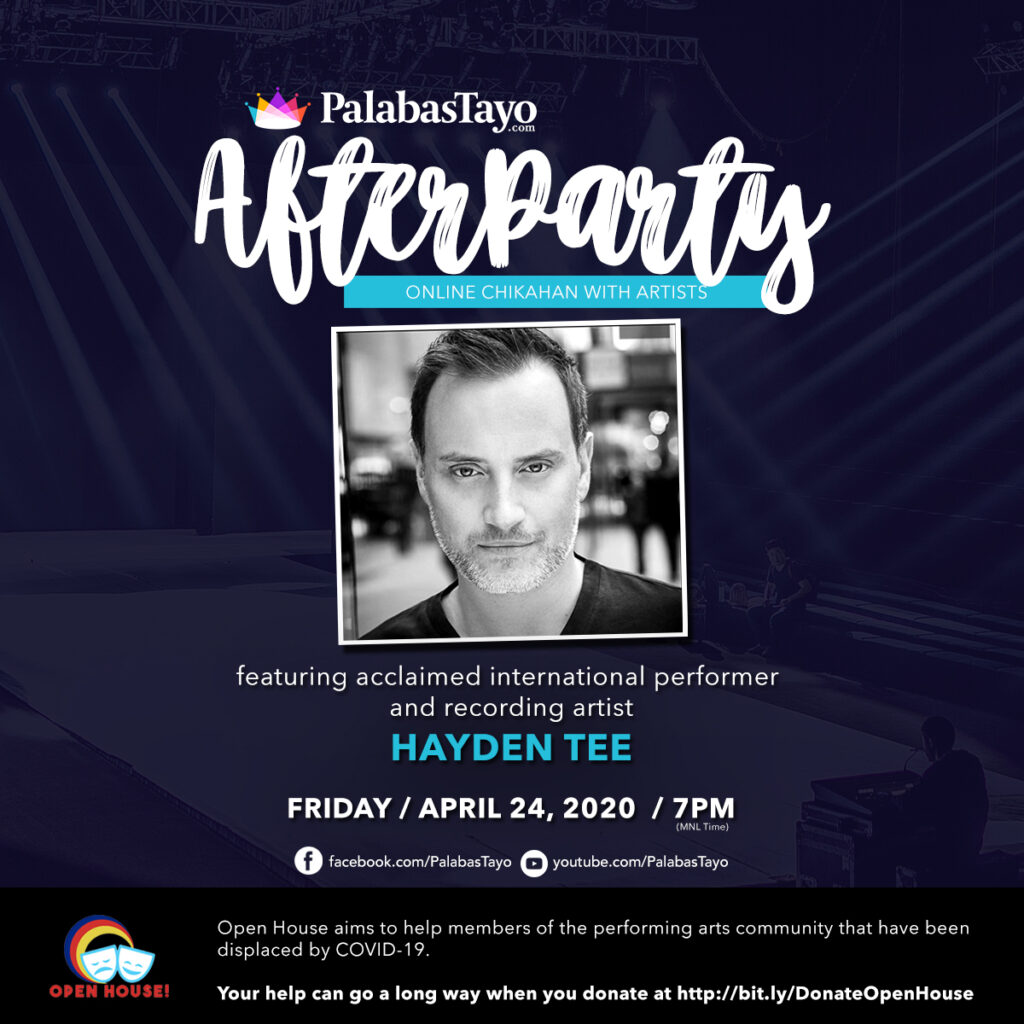 Acclaimed international theater performer and recording artist, Hayden Tee is lending his talents to help raise funds for displaced workers of the performing arts community in the Philippines. He will be spotlighted in PalabasTayo’s “After Party” an online series featuring conversations with artists on Friday, 24 April 2020.

Tee was recently in the Philippines playing Ms. Trunchbull in the Manila run of Matilda the Musical tour. Sadly, due to the enhanced community quarantine, the show that was supposed to run until March 22 at The Theater at Solaire was canceled a week after it opened.

The touring cast members from the Royal Shakespeare Company had to fly back to their respective homes before the Manila lockdown took place. Tee had to fly to New York before flying back to his home in New Zealand, and like most people who travelled to COVID-19 affective areas, he had to do self quarantine for several days.

Asked why he’s helping the Pinoy performing arts community, the actor best known for his award-winning portrayal of Javert in the Australian, Broadway and Dubai productions of Les Misérables said, “Filipinos are one of the friendliest and most thoughtful people I know. I instantly warmed up to them when I landed in Manila. That’s why it was sad when we were forced to cut our stay short.” He adds, “Everyone involved in the performing arts all over the world was robbed of their source of income because of the cancelled shows. We are all in this together so when PalabasTayo reached out to me, I easily said “sure”. I am just happy to do what I can, to help out.”

Tee will be streaming live from his home in New Zealand on the 24th of April at 7PM (Manila Time) via PalabasTayo’s Facebook Page (http://facebook.com/PalabasTayo) and YouTube Channel (http://youtube.com/PalabasTayo). The event which will be guest co-hosted by Markus Mann is in partnership with Open House Fundraiser which aims to raise 1 Million PHP to help 500 displaced workers. The show will be for free but everyone is encouraged to donate suggested amounts in the form of tickets to simulate the tradition of live theater and help raise funds for the project. Viewers may click http://bit.ly/DonateOpenHouse to donate. All proceeds go directly to production workers like dressers, stage managers, lighting and sound technicians, stagehands, musicians, and more through the Artists Welfare Project.

For updates, follow the social media accounts of PalabasTayo, an online lifestyle and entertainment portal that spotlights the arts, the artists, and their quest for excellence.