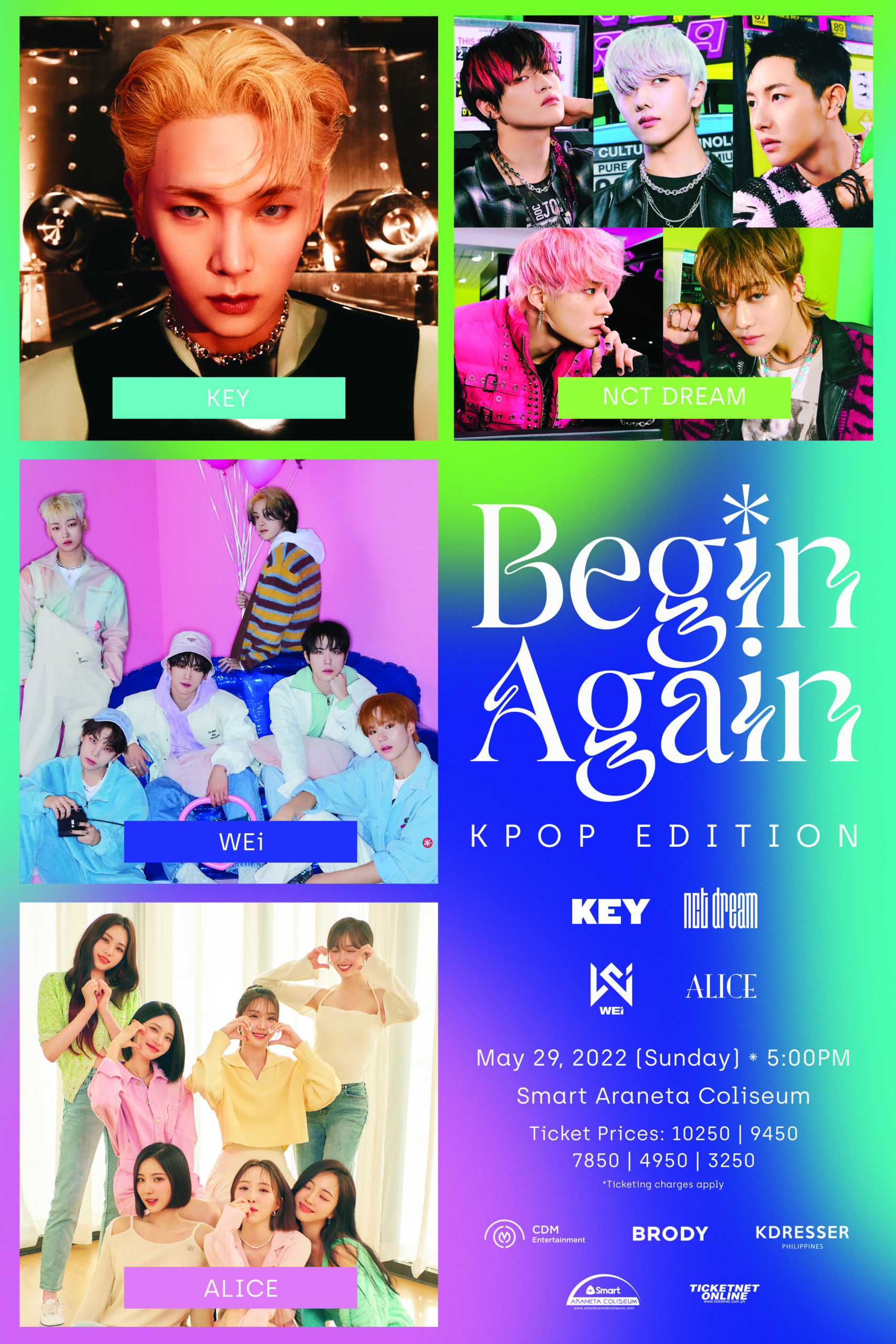 Four of the biggest South Korean acts are slated to visit Manila for “Begin Again: KPOP Edition” taking place on May 29, 2022, 5 PM at the Smart Araneta Coliseum.  Fans are sure to have a blast with NCT DREAM, SHINee’s KEY, WEi, and ALICE performing their latest hit songs on the Philippine stage.

NCT DREAM will be headlining the show, coming on the heels of their widely successful album “Glitch Mode.” Released last March, NCT DREAM has recently wrapped promotions after selling an impressive 2 million albums. This makes them a double million-seller for two consecutive years—a feat only a handful of groups have achieved.

Seemingly a magnet for historic achievements, NCT DREAM is set to tick another one on its checklist. Back in 2020, the group is the last to hold a live concert in the Philippines before COVID-19 lockdown. Now, they’ll be one of the first international artists to perform live again after two years. Needless to say, NCT DREAM is making dreams come true with their return to the country.

Performing alongside the group is labelmate KEY, lead dancer, and lead rapper of SHINee. In 2018, KEY made his solo debut with the single “Forever Yours,” which he quickly followed up with a full studio album titled “Face.” The album peaked at number 5 on Korea’s Gaon Chart and snagged a top 10 entry on the US World Albums Chart.

September last year, KEY released his first mini-album “Bad Love,” which earned him another top entry on the Gaon Chart. The titular track also enjoyed commercial and critical success with its Music Core win and The Ringer naming it the Best KPOP Song of 2021.

WEi, a six-member boy group from OUI Entertainment, is also joining in the fun. Though only debuting 2 years ago, the group is no stranger to the limelight. Members DAE HYEON, DONG HAN, YONG HA, YO HAN, SEOK HWA, and JUN SEO have different charms, and as a fourth-generation youth icon, WEi is loved by domestic and international fans.

In March of this year, the group released their fourth mini-album “Love Pt.1: First Love” with “Too Bad” as the main title. The album sold more than 100,000 copies and placed at number five on Korea’s Gaon Chart.

Last but definitely not the least is ALICE, consisting of members EJ, Do-A, Chaejeong, Yeonjae, Yukyung, Sohee, and Karin. In 2018, the group was named the Best Rookie Group at the 24th Korean Entertainment Arts Awards. Fresh off the May 4 release of their latest single “Power of Love,” these fearsome femmes are ready to wow on the stage.

The 2-hour concert marks the first live KPOP show in the country since the COVID-19 lockdown. Don’t miss this historic event and come see talented artists on one stage.

Official ticket selling begins the next day, May 18, 2022 (10AM) via https://www.ticketnet.com.ph/ and all Ticketnet outlets nationwide.

Prices are as follows:

*Prices are subject to ticketing charges.

“Begin Again: KPOP Edition” is brought to you by CDM Entertainment in partnership with BRODYWORKS.