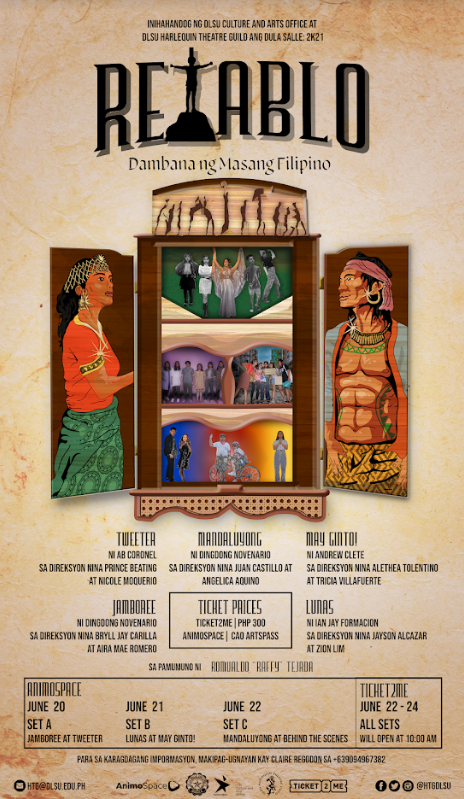 It has been a tradition of De La Salle University’s Harlequin Theatre Guild to have a passion project to showcase the talents and the knowledge gained by the guild’s apprentices from their weekly training through a production – DuLa Salle.

As DLSU Harlequin Theatre is the only-recognized theatre organization in DLSU-Manila, it is quite expected that this time they only take their stakes higher – by reinterpreting the artworks of Filipino visual artists, five online plays will exhibit the theme of Retablo: Dambana ng Masang Filipino.

“There’s such a variety of stories among this year’s films that there’s sort of like one thing for everyone. We have some comedic films, drama films, musicals. So audiences should definitely look forward to that.” Director Bryll Carilla explains that the spectrum of this film production is limitless, best believe that there is a need to buckle up in this spectacular ride!

Inspirations of the short films draw from five different paintings and statues that were created by outstanding Filipino artists such as Carlos Francisco, Elmer Borlongan and Vicente Manansala. And although these artworks are merely shown in the limelight, it is about time that individuals notice the message behind these foretold mediums.

What perfect way to do that you might ask? Through the heartbeat of theater.

Rich in emphasizing Filipino culture, Harlequin’s massive impact towards the Lasallian community has strengthened the values and morals of each student that comes to watch their shows.

Director Prince Beating mentions that “The selection of stories are much different from the ones shown in the previous production last year, the theme is clearer with its message of showing the nuances of the Filipino culture that is much more relatable to the audience.”

Taking more risks than ever before, Harlequin is thrilled to welcome curious hearts and minds that are starving to seek justice for the unjustified through reiterating patterned experiences brought about by this strange period.

“Retablo aims to deliver—the spirit of change, growth, and survival.” – Director Jayson Alcazar Show dates will begin from June 20 to 22 through Animo Space Canvas and June 22-24 via Ticket2Me platform. Tickets will be sold for Php 300 each. For further inquiries, kindly contact Claire Regodon through her mobile number 0909 496 7382