DJ Alesso on December 17, 2022 at the SMDC Festival Grounds

DJ Alesso on December 17, 2022 at the SMDC Festival Grounds 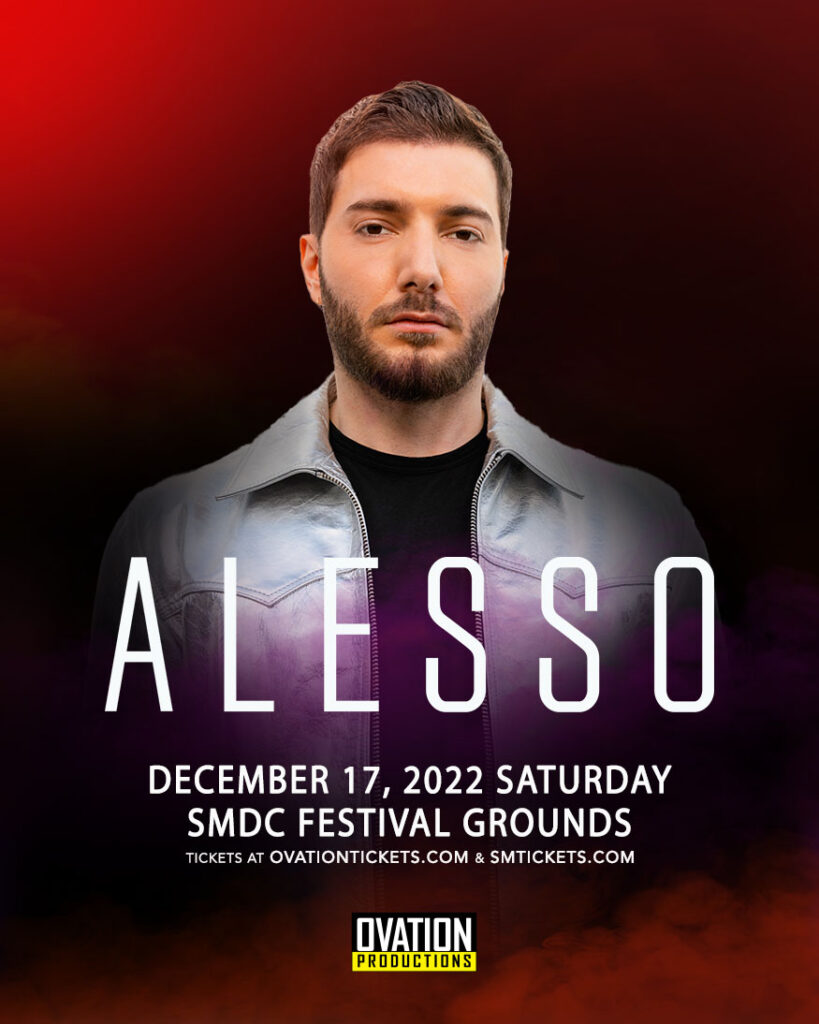 Ovation Productions, promoter in the Philippines of the ROAD TO ULTRA the premier electronic music festival presents world-famous DJ Alesso on December 17, 2022 at the SMDC Festival Grounds.

Hailing from Stockholm, Alesso won over his country from the very start of his career. His second single as the lead artist, 2012’s “Calling (Losing My Mind)” with the legendary Swedish House Mafia’s Sebastian Ingrosso and Grammy award-winning OneRepublic frontman Ryan Tedder, was certified 2x Platinum in Sweden while also reaching no. 1 on Billboard’s US Hot Dance Club Songs.

Alesso’s Remix to “Pressure” by Nadia Ali, Starkillers, and Alex Kenji was named the “tune of 2011” by Kaskade enroute to a nomination for Best Progressive Track at the International Dance Music Awards. In 2013, he released “If I Lose Myself” with OneRepublic which was certified 4x Platinum in Sweden and “Under Control” with Calvin Harris featuring Hurts which was certified Gold in the United States.

Alesso’s ascension was sped up with the success of 2014’s “Heroes (We Could Be)” featuring Tove Lo. With his production genius and honest songwriting on full display, the track became a worldwide hit. Again, he reached no. 1 on Billboard’s US Dance Club Songs and no. 11 on the Top 40. It was certified Platinum in the US.

With his music and visuals, Alesso creates experiences that have made him one of the genre’s most celebrated performers. In 2012, he joined Madonna as the opener during her MDNA tour. He’s also moved fans at the biggest festivals that music has to offer like Coachella, EDC, Ultra, and Tomorrowland.

In recent years, he has produced several crossover pop records including a collaboration Hailee Steinfeld released “Let Me Go” with Florida Georgia Line and Watt; reaching no. 9 on the US Hot Dance/Electronic Songs chart and cracked the US Billboard Hot 100. His collaboration with Anitta, “Is That For Me,” cracked Billboard’s Hot Dance/Electronic Songs’ top 25. Thesong earned a Radio Disney Music Award nomination.

In 2018 he joined Good Morning America on August 31st for a special performance that wrapped up the iconic show’s Summer Concert Series, performing “REMEDY” live for the first time. “REMEDY” became another hit for Alesso, reaching no. 1 on the US Dance Airplay chart.

Alesso was featured on Vai Anitta, a Netflix original docu-series. His work on the “Is That For Me” record and video shoot was highlighted. He alsoreleased “Tilted Towers” an ambitious crossover, blending the Dance music world with the gaming community. He debuted his song on a Twitch livestream with Ninja, the gaming world’s biggest star, premiering it for nearly 50k fans at once.

In February 2019, Alesso performed at Venezuela Aid Live in Cúcuta, Colombia for over 250,000 attendees that we’re there in support for Humanitarian Aid for Venezuela.

Shortly after Alesso returned to his roots in March 2019 with the release of a three-track progressive house Mixtape titled “PROGRESSO VOLUME 1.” Followed by a progressive remix of yet another pop collaboration with TINI titled “Sad Song”.

Continuing a big year of critically-praised releases, the Swedish progressive powerhouse collaborated with the fast-rising mystery producer SUMR CAMP to deliver a high energy deep house Dance track “In The Middle” Ready for clubs round the world. Garnering 27 NMF worldwide and instant radio adds, the track is already becoming a fan favorite.

In 2020 Alesso started the year with live performances surrounding events such as X Games Aspen, NY Fashion Week, and Super Bowl LIV. Starting the year with a progressive house anothem “One Last Time” he and collaborators Dubvision garnered top spins at dance radio on various channels.

In April, Alesso and Liam Payne formerly of One Direction, connected to release “Midnight” an uplifting ballad speaking to the times. The pair received worldwide attention with guest performances/appearances on The Late Late Show with James Corden, Good Morning Britain.

Alesso at SMDC Festival Grounds is presented by Ovation Productions in partnership with Spade Empire Events and TAPGO TV. Tickets out soon via OVATIONTICKETS.COM and SMTICKETS.COM.