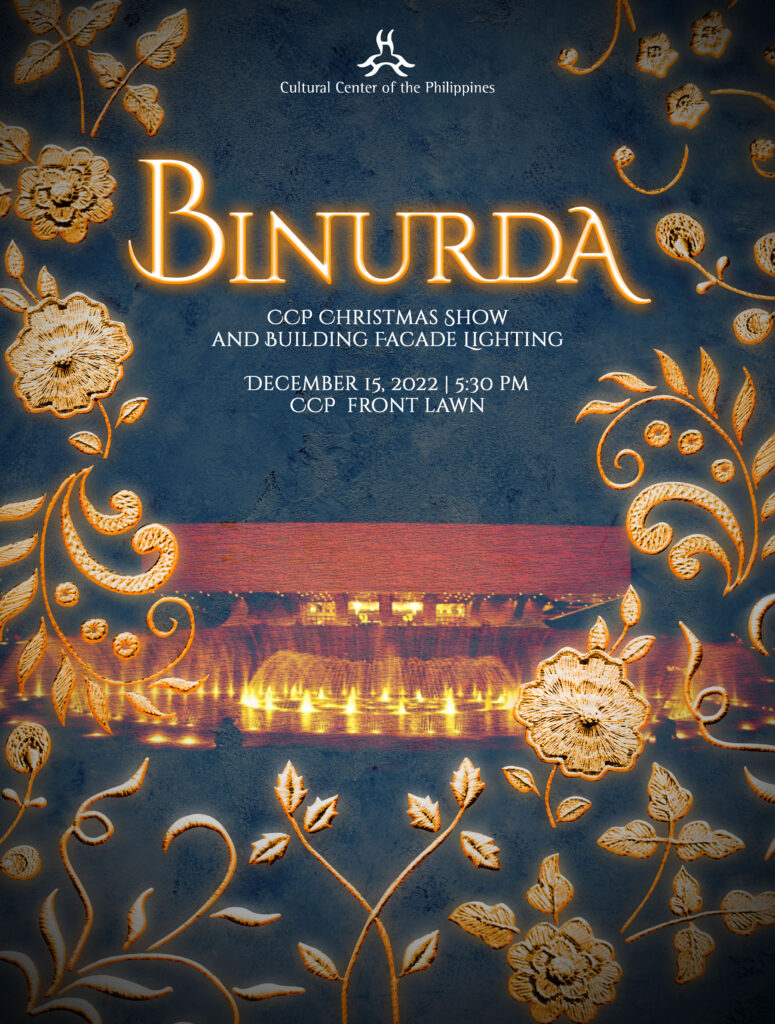 THE Cultural Center of the Philippines (CCP) weaves distinct culture bound by colorful textile patterns and motifs to usher in the Yuletide season, to be launched on December 15, 5:30pm, with a holiday extravaganza featuring the hottest artists and performers in the country.

Dubbed “Binurda,” the CCP façade décors explore the embroidery heritage in the Philippines, highlighting the warp of cultural traditions interwoven with the weft of the Filipino people’s stories.

Through creative metalwork characterizing the pulling and tying of the warp and weft, the CCP travertine façade turns into a fabric embroidered with a distinct Sampaguita motif, complemented with other Philippine flora and fauna patterns and indigenous geometry designs.

Indigenous to the Philippines, and considered as one of its national flowers, sampaguita is often offered to welcome, send off, and show appreciation to family, friends and guests.  For CCP, it is a fitting “grand facade” gesture of appreciation to our audiences who have supported the premiere arts institution for the past 53 years.

The tone-on-tone design of the CCP holiday decoration provides an understated elegance to the façade during the day, and seamlessly transitions to a dazzling light spectacle at night.

As the Main Building closes for renovation and restoration in the coming years, Binurda symbolizes the people’s anticipation and the artistic promise of fresh blossoming of a new culture and arts institution.

In one festive tapestry, the façade decoration will be sewn together with a grand concert, featuring performances by Bayanihan, The National Dance Company of the Philippines, the Nightingales, the Male Ensemble of the Philippines (MEP), and surprise performers.

Directed by Dexter Santos, the concert is divided into different suites that bind Filipinos – the Tanglaw Ng Hiraya, Pagmamapa sa Padron at Pinagmulan, Pagtatahi ng Ugnayan, Pagbubuhol at Pagbibigkis, and Paglaladlad at Pagdiriwang.

First suite brings audiences to a journey to the land of the dream weavers in the Southern Philippines; stitching the second suite, focusing on Muslim Filipino culture, music and dance.

Binurda concert and lighting event is open to the public.  The façade decorations will run until January 2023.

Due to the ongoing pandemic, the new normal protocol of the CCP will still be implemented.  Everyone is advised to wear a facemask upon entering the premises and bring a vaccination card/certificate (e-copies are allowed).  Find out more about CCP’s new normal protocol here: https://bit.ly/CCPNewNormalProtocol2022.