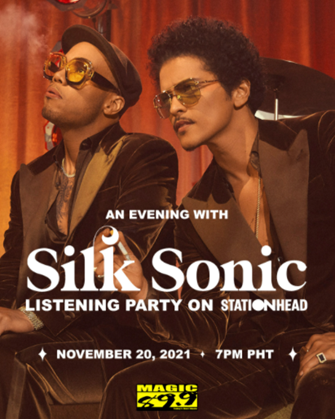 It’s the moment we’ve been waiting for all year: An Evening With Silk Sonic has arrived. Multiple GRAMMY® Award winners Bruno Mars and Anderson .Paak have finally dropped their debut album as Silk Sonic with help from special guest host Bootsy Collins. An Evening With Silk Sonic includes their three previously released charting hits “Leave The Door Open,” “Skate,” and “Smokin Out The Window” alongside 5 unreleased tracks.

Filipino Hooligans are in for a treat as Warner Music Philippines, together with Magic 89.9, are hosting a listening party over at Stationhead on November 20, Saturday, at 7pm Philippine Time. Get a chance to win official Silk Sonic merchandise while you listen with your fellow Hooligans in the Philippines! To join, just download the Stationhead app and join the party at Silk Sonic’s official Stationhead profile here: wmp.lnk.to/silksonicstationhead