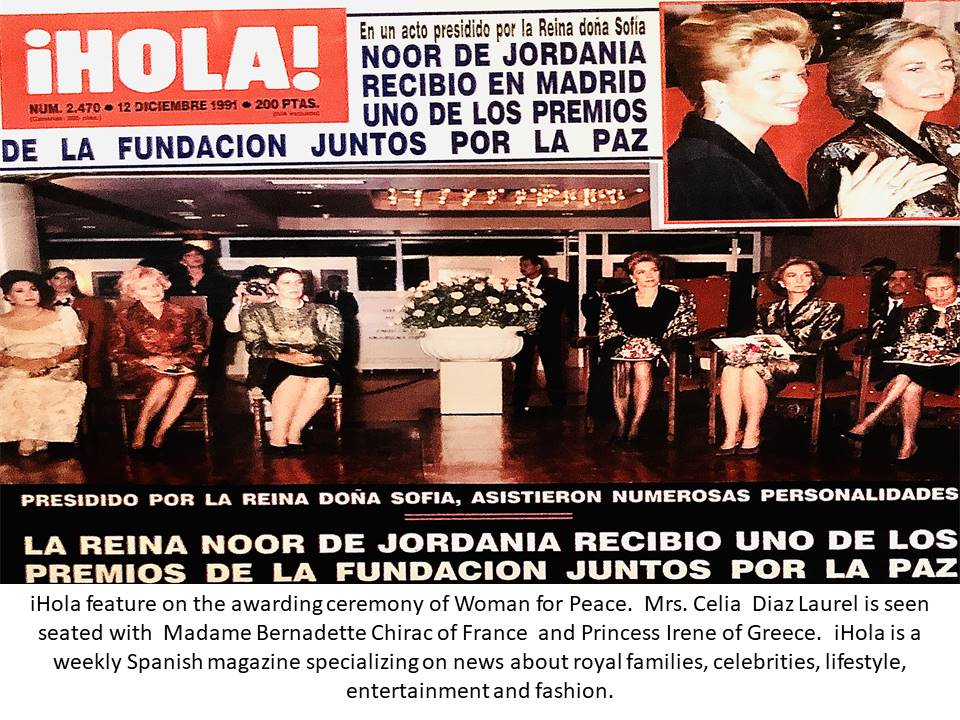 November 29, 2021 marks the pearl anniversary of Mrs. Celia Diaz Laurel’s conferment of the highly prestigious international peace and humanitarian award “Woman for Peace” given by the Insieme Per La Pace (Together for Peace) Foundation.

Like its founder and president Madame Mariapia Fanfani who herself had devoted all her life to cater to the sick, poor, and victims of war, the honor is bestowed upon remarkable women who have helped promote, advance, and partake in global peacebuilding processes through meaningful social, educational, and cultural means.

Mrs. Laurel’s vast humanitarian work began in 1986 when she volunteered to head our country’s national bid for the United Nations’ Million Minutes of Peace —a worldwide campaign asking people (even with differing religions) to pledge and devote “minutes of meditation, positive thinking or prayer for peace.” Under her leadership, she launched a series of peaceful undertakings that triumphantly landed the Philippines at the fourth slot (out of the 88 participating nations) with an overwhelming 94,000,000 minutes collected and dedicated to peace!

Following this success, UN Secretary-General Javier Perez de Cuellar flew to the Philippines in 1987 to honor Mrs. Laurel with the “United Nations for Peace Award” and to personally invite her to speak at the Million Minutes for Peace international conference that same year. She then attended the Universal Peace Conference in Mt. Abu in India and the World Media Association in Seoul, South Korea. She also stood before the International Security Council to discuss, among others, the impact of insurgency in the Philippines on the general security of the nations in the Southeast Asian region. 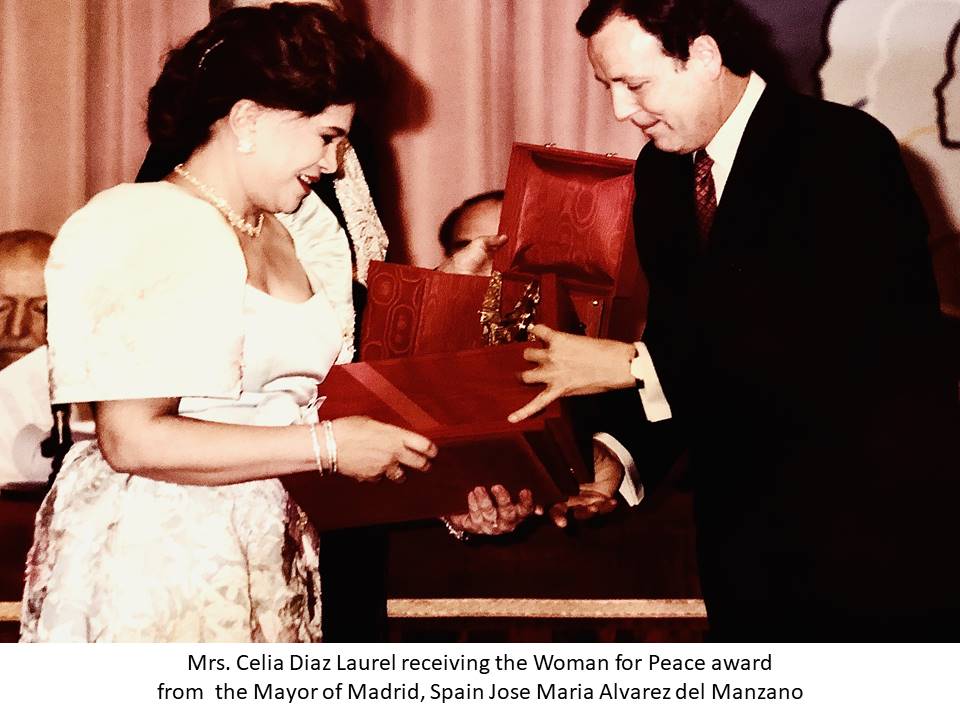 The grand awarding ceremony was held at Pabellon De Cecilio Rodriguez in Madrid, Spain on November 29, 1991. Besides Mrs. Laurel, other honorees that year were Queen Noor of Jordan, Madame Chirac of France, and Madame Silva of Portugal. The occasion had 400 guests in attendance ––  comprising mostly of prominent international personalities like Senator Gianni Agnelli of Italy and royalties like Prince Saddrudin Aga Khan, King Simeon of Bulgary, and Baron and Baroness con Thiessen Bormenisza. With her conferment, she joined the revered roster of past awardees like Queen Sophia of Spain, Raissa Gorbachev, Former US First Ladies Nancy Reagan and Barbara Bush, Marcella Perez de Cuellar, Diana Vreeland, President Violeta Chamurro of Nicaragua, and Queen Sirikit of Thailand.

In her acceptance speech which she excellently delivered in Italian, Mrs. Laurel emphasized her “fervent wish that the day will come– perhaps in the next 100 years – when the efforts of Together For Peace, with all our collective efforts, will bring about a social floor below which the poor in the world will never again sink and suffer.”

With Celia Diaz Laurel, our country’s very own Woman for Peace, now at peace with her Creator, it becomes therefore incumbent upon us who were left behind to continue the crusade she tirelessly but silently began decades ago. The nearing pearl anniversary of her conferment, therefore, is meant to evoke and challenge us to continually work towards achieving peace and creating a harmonious social balance in the next thirty years or so… especially here in this part of the world –our beloved Philippines – where we, stil need them the most.